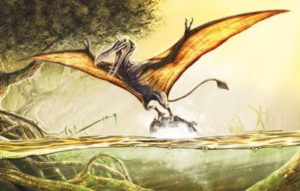 African natives have seen and encountered Kongamato. They have beliefs about the cryptid they deem to be a real animal, not supernatural. What might it be?

The name, Kongamato, means overwhelmer of boats. The cryptids have been sighted in Zambia, Kenya and Namibia by both natives, Europeans and Americans, including a well known cryptozoologist.

Africans when shown a picture of a pterodactyl, agree that the cryptids look like it. Could these flying reptiles have survived from the Age of the Dinosaurs?

During the Jurassic and Cretaceous Ages, about 65 million years ago, there were flying reptiles, pterosaurs. Nearly all of their fossils found have been in marine deposits, so it’s most likely that they were fish eaters who lived near coastal waters.

Most pterosaurs ranged from size of a sparrow to that of an eagle, but the pteranodon had a wingspan of 27 feet and the quetzalcoatlus had one of up to 60 feet.

Africans reported seeing flying animals that match the description of pterosaurs for ages and reported that some people have been killed by them. Those who were shown pictures of the pterodactyl agreed that it was Kongamato.

Africans don’t see it as a supernatural being, like a mulombe, demon. They regard it as a horrible beast, worse than a rogue lion.

The Zambian Kaonde tribe used to carry charms, muchi wa Kongamato, for protection from the beast. Some believe that seeing Kongamato is a death omen.

Kenyan Steve Romandi-Menya, said Kongamato, which they call Batamzinga, is said to eat decomposing human flesh and dig up corpses if they’re not buried deep enough. The Kitui Wakamba natives believe it flies to the ground from Mount Kenya nightly. 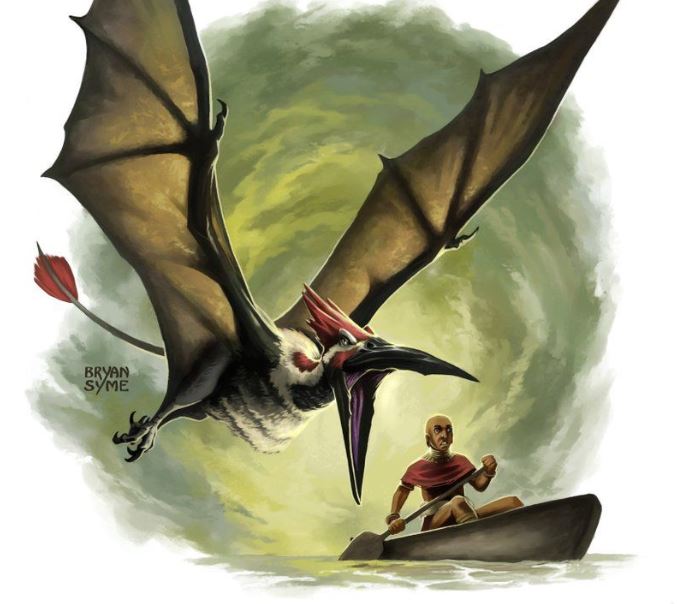 In 1925, a native explored a Zambian swamp that was known as demons’ territory and was wounded by a strange huge bird. When he was shown a pterosaur’s picture, he screamed and fled in horror.

In 1956, engineer J.P.F. Brown saw two prehistoric-looking creatures flying over Fort Rosebery, Zambia around 6 PM. They had long tails, narrow heads, pointed teeth and a wingspan of approximately 3 to 3 1/2 feet. Local Awembas aver they live in caves near the Zambezi River.

In 1957, a man went to a Fort Rosebery hospital ER with a severe chest wound and told the doctor that a huge bird attacked him in the Bangweulu swamps. When asked to draw a picture of the creature the sketch resembled a pterosaur.

In 1988, biologist Roy Mackal PhD led an expedition to Namibia where reports of a creature with a wingspan of up to 30 feet were gathered.

He’s a vice-president of the International Society of Cryptozoology and was the Scientific Director of the Loch Ness Phenomena Investigation Bureau between 1965 and 1975.

There was no hard evidence to prove the existence of Kongamato; however team member James Kosi, reportedly saw the cryptid from about 1000 feet away. He described it as a giant glider shaped creature that was black with white markings.

During a 1932 expedition, Ivan Sanderson had an encounter with a Kongamato-like creature called Olitau by the natives in the Cameroon. He shot a fruit eating bat that fell into the water.

As he was trying to retrieve it he fell and when he regained his footing, party member George, yelled at him to look out. Sanderson saw a black eagle-sized creature with bat-like wings and pointed teeth flying at him, so he submerged.

When he emerged it was gone. It reappeared and flew at George before it soared away. When they returned to camp, they told the natives about the encounter. The Africans asked the explorers where they encountered Olitau.

Sanderson pointed toward the river. The terrified natives ran off in the opposite direction with their guns, leaving valuables behind. 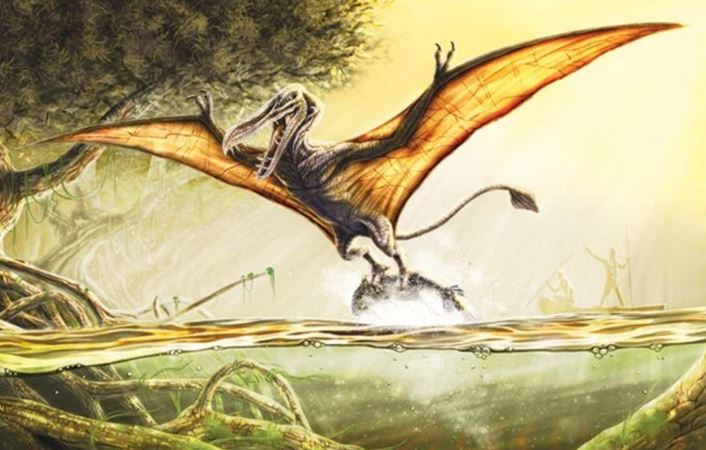 Is Kongamato Mistaken for a Known Bird?

Two species of birds live in Zambia’s swampy regions that might be mistaken for the cryptid. The shoebill stork is a dark feathered bird, has an 8 feet wingspan and a prehistoric appearance.

There’s no evidence of the bird acting aggressively toward humans, which they try to avoid. The saddle-billed stork has a wingspan up to 8 feet long, a bright red bill with a stripe and black and yellow feathers that run from the eyes down into the stripe and orange stripes on the sides of their head.

Kongamato is featherless and has teeth; these birds don’t. It’s possible that the birds could account for some sightings. Many natives believe that monsters lurk in swamps waiting to attack interlopers. A person might see these birds and believe it’s Kongamato.

Some have proposed that the creature that attacked Sanderson and George was the mate of the bat Sanderson shot. Fruit bats don’t attack humans and they’re not black. Sanderson was an extremely knowledgeable and internationally respected zoologist and didn’t recognize the creature.

Skeptics suggest sightings of Kongamato came from the natives’ imaginations who worked at archeological digs where fossilized pterosaurs were discovered in Tendagaru, Tanzania, before World War I. The digs were over 900 miles from Zambia. There have been no reports from Tanzania.

The Popobawa is another flying African cryptid. The alien creatures have also been sighted in America, such as the Thunderbird and Texas’ Big Bird. Is it possible that these avians survived since prehistoric times?

The coelacanth, a fish believed to be extinct, was caught in the 1930s. Since then, schools of these fish have been discovered. The tuatara, an iguana-like reptile, is a survivor from prehistoric times. They’re called living fossils.

Maybe, some day, there will be scientific proof that the Kongamato exists and it will join their ranks.

Cryptozoology A to Z, Loren Coleman and Jerome Clark, (Fireside, 1999)

Pastor considers angels to be representatives of a highly developed civilization