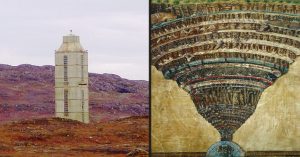 In 1970, the drilling of a unique well was started. The Kola superdeep has a depth of 12262 meters. A huge success for Soviet specialists, but few people know that it was originally planned to descend to 15,000 meters.

The reason why the project was curtailed was political – the country in charge of drilling ceased to exist. The USSR was restructured, and with it, work on many outstanding projects was stopped.

When the mark of 12 kilometers was reached, it was reported to the whole world. People from many countries came to see the achievement. In 1990 journalists arrived from Finland. They own a report that in the bowels of our planet, researchers have discovered a real hell.

A thermal protection microphone was lowered to the deepest point of the Kola well, and it recorded a strange wailing rumble, as if the souls of the martyrs were calling for help.

In 1993, Italian journalists decided to conduct their own investigation and even allegedly found three workers who were personally involved in drilling. According to one of them, at a depth of 12,000 meters, the temperature exceeded 200 degrees.

Because of this, the equipment often broke down. They had to change drilling rigs two or three times a week – such waste and led to the closure of the project. It was not possible to reach a depth of 15 kilometers.

The second man in years told the story of the devils that drove the workers crazy. Because of such cases, an outflow of specialists began, and he also confirmed the presence of screams and noises at great depths.

The third participant in the events at the Kola super-deep well said that the workers, descending underground, were at the mercy of some forces. There is a known case when six absolutely healthy men returned from a shift in an insane state. They answered all questions that they saw demons.

We don’t know how true all these horror stories can be, but the fact that the Kola superdeep well gave the world many discoveries is a fact. Here are just a few of them:

2. Thanks to research, it was possible to establish that the age of the Earth is one and a half billion years older.

3. The temperature in the bowels of the Earth is uneven and higher than previously thought.

As for demons and hell in the depths of our planet, this is hard to believe. Working at great depths implies a strong, sometimes even shocking, impact on the psyche. In this state, anything can be imagined.