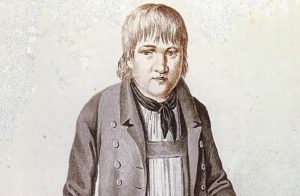 Hauser’s claims, and his death by stabbing, sparked much debate and controversy. On 26th May 1828, a strange, teenage boy stumbled up to the gates of Nuremberg. He had a strong build. light curly hair, a pale complexion, and moved as if he was drunk.

A local shoemaker, Georg Weickmann, approached the boy to see who he was, but the lad only said, ‘I would like to be a rider the way my father was.’ He handed Weickmann an envelope addressed to the Captain of the fourth squadron of the sixth regiment of the Light Cavalry. The shoemaker took him to the captain, who opened the letter.

It explained that the boy had been left with a poor labourer who had kept him locked inside all his life.

But the boy was now ready to serve in the king’s army. The cavalry captain questioned the boy, but the only words he said were, ‘don’t know’, ‘take me home’, and ‘horse’. He could also write the name ‘Kaspar Hauser’.

In the end, the captain put the boy in the local prison but the jailer took pity on him. The jailer’s children began to teach him to speak, write and draw. He seemed to have no concept of behaviour; had no facial expressions; could not understand the difference between men and women; was happy to sleep sitting up; acted like a baby or infant child and was particularly happy in the dark.

In July 1828 a local magistrate suggested to Nuremberg’s authorities that it would be best for Hauser to be taken out of the jail and placed in the custody of George Friedrich Daumer, a university professor and psychologist. Daumer helped Hauser change into a normal young man, but also kept a record of the strange boy’s behavior.

Daumer realised the extent of Hauser’s amazing heightened senses. He could read in the dark, hear whispers from extreme distances and discern who was in a pitch black room simply by their smell. Unfortunately, as his awareness and education about the world around him increased, these extraordinary abilities waned.

By early 1829, Hauser had learnt enough to be able to write his autobiography. In it he revealed that he had been kept in a cell 7ft long, 4ft wide and 5ft high by a man whose face he never saw. He slept on a straw bed, and when he woke there would be water and bread for him to eat.

Sometimes the water would taste odd, and he would pass out only to find himself cleaned and groomed, wearing with a fresh set of clothes when he awoke. One day the man came to Hauser’s cell door with books and taught him to read a little, write his name, and repeat the rudimentary phrases he pronounced on his public arrival.

The next day, Hauser and his captor began a three day journey which culminated in his appearance at Nuremberg. Hauser’s autobiography opened the door to a new terror. This tale, still famous today, aroused great curiosity and made him an object of international attention.

Rumours arose that he was of princely parentage, possibly of Baden origin, but there were also claims that he was an impostor. It is nowadays agreed among serious researchers that Hauser’s account cannot possibly be true.

With reference to modern knowledge of hospitalism, and notably the work of René Spitz, psychiatrist Karl Leonhard concluded: “If he had been living since childhood under the conditions he describes, he would not have developed beyond the condition of an idiot; indeed he would not have remained alive long. His tale is so full of absurdities that it is astonishing that it was ever believed and is even today still believed by many people.”

On October 17, 1829, Hauser did not come to the midday meal, but was found bleeding from a cut wound on the forehead, in the cellar of Daumer’s house. 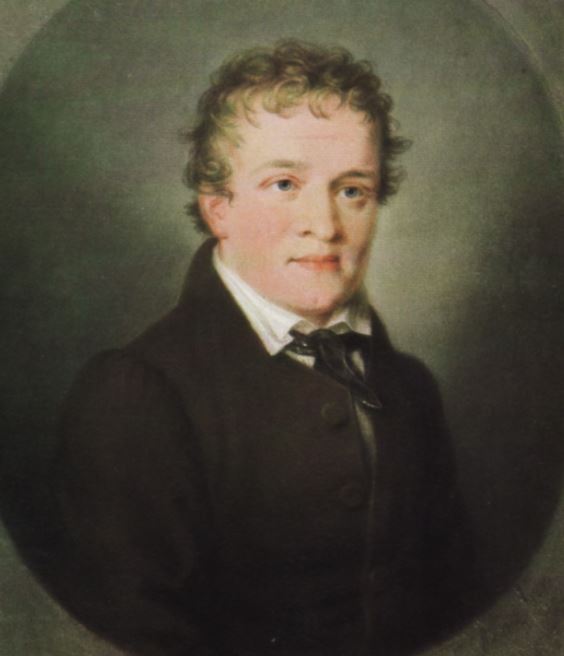 He asserted that while sitting on the privy he had been attacked and wounded by a hooded man who had also threatened him with the words: “You still have to die ere you leave the city of Nuremberg.” Hauser said that by the voice he had recognized the man as the one who had brought him to Nuremberg.

As was obvious from his blood trail, Hauser had at first fled to the first floor where his room was, but then instead of moving on to his caretakers, he had returned downstairs, and had climbed through a trap door into the cellar.

Alarmed officials called for a police escort and transferred him to the care of Johann Biberbach, one of the municipal authorities. The alleged attack on Hauser also fueled rumours about his possible descent from the House of Baden.

Hauser’s critics are of the opinion that he had inflicted the wound on himself with a razor, which he then had brought back to his room before going to the cellar. He might have done so to arouse pity and thus escape chiding for a recent quarrel with Daumer, who had come to believe that the boy had a tendency to lie.

On 14th December 1833, Hauser went to a local park to meet a man who had promised to reveal details about his mother’s identity. They met, and the stranger motioned as if to give Hauser a wallet, but as the young man leant forward, he was stabbed in his side.

When Policeman Herrlein searched the Court Garden he found a small violet purse containing a penciled note in “Spiegelschrift” (mirror writing). The message read, in German: Hauser will be able to tell you quite precisely how I look and from where I am. To save Hauser the effort, I want to tell you myself from where I come _ _ . I come from from _ _ _ the Bavarian border _ _ On the river _ _ _ _ _ I even want to tell you the name: M. L. Ö.

The wound in Hauser’s chest proved to be fatal, and he died on December 17, 1833. Inconsistencies in Hauser’s account led the Ansbach court of enquiry to suspect that Hauser stabbed himself and invented a tale about being attacked.

The note in the purse that was found in the Court Garden contained one spelling error and one grammatical error, both of which were typical for Hauser — who, on his deathbed, kept muttering incoherencies about “writing with pencil”.

Although he had been very eager that the purse be found, he did not ask for its contents. The note itself was folded in a specific triangular form — just the way Hauser used to fold his letters, according to Mrs. Meyer. Forensic doctors agreed that the wound could indeed be self-inflicted.

Many historians believe that he had wounded himself in a bid to revive public interest in his story and to convince Stanhope to fulfill his promise to take him to England, but that he stabbed himself more deeply than he had planned. The suspicion developed that Hauser was actually a Baden prince and son of Stephanie, Grand Duchess of Bavaria.

Certainly, many of the Bavarian aristocracy had such suspicions, and King Ludwig of Bavaria even wrote in his diary that Hauser was the ‘rightful Grand Duke of Baden’.

The theory is that Stephanie and Karl of Baden had Hauser in 1812, but Karl’s stepmother, the Duchess of Hochberg, switched him at birth with a sickly peasant child. The ill baby soon passed away and subsequent boys sired by Karl with Stephanie also died young. Karl himself died in strange circumstances, and on his deathbed said he believed that he and his boys had been poisoned.

Karl’s throne then went to his stepbrother, the Duchess of Hochberg’s son Leopold. It is an unprovable theory. All we definitely know is that in a peaceful countryside churchyard there is a gravestone that reads: ‘Here lies Kaspar Hauser, riddle of his time. His birth was unknown, his death mysterious.’