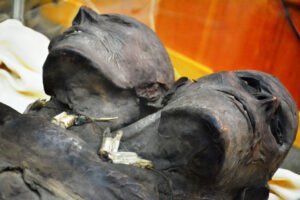 Kap Dwa is an ancient, mummified two-headed Patagonian giant that originally originated in the jungles of Argentina, South America.

Kap Dwa is roughly translated as “two heads” in the Maylay language, is the preserved remains of twelve foot tall, two-headed “giant” that apparently currently resides in Baltimore, Maryland.

Classified by some as Homo Giganticus and featured here as evidence of the existence of giant humans.

The creature’s story begins in 1673, where the giant of over 12 feet with two heads, was captured by Spanish sailors and set captive on their ship.

The Spaniards lashed him to the mainmast, but he broke free and during the ensuing battle suffered a fatal injury; they skewered him through the chest with a pike.

What happened to him next isn’t exactly clear, and the story fades away after that, but his naturally mummified remains were eventually brought to England in the 19th century.

He then entered the Edwardian Horror Circuit and over the years was passed from showman to showman, eventually ending up at Weston’s Birnbeck Pier in 1914.

After spending the next 45 years on display in North Somerset, England, old Kap Dwa was purchased by one “Lord” Thomas Howard in 1959, and following a few more hand-offs he ultimately ended up in Baltimore, MD, of all places.

Frank Adey remembers seeing it in Blackpool around 1960. “There were nosing’s of sutures or other ‘joins’, even though the body was largely unclothed”. It was again on display in Blackpool at the end of 1960. One account maintains that in 1974 Howard sold or transferred Kap Dwa to his brother Scott in New Jersey.

Back in the 1930s, two doctors and a radiologist inspected it in Weston and found “no perceptual evidence of it being a fake”. They speculated that it was some kind of conjoined twin.

He now rests in the bizarre collection of oddities that is Bob’s Side Show at The Antique Man Ltd in Baltimore, owned by Robert Gerber and his wife.

You may think, this is nothing but another elaborate fake. However, Kap-Dwa does exist and the mummified remains can be found in Gerber’s collection. 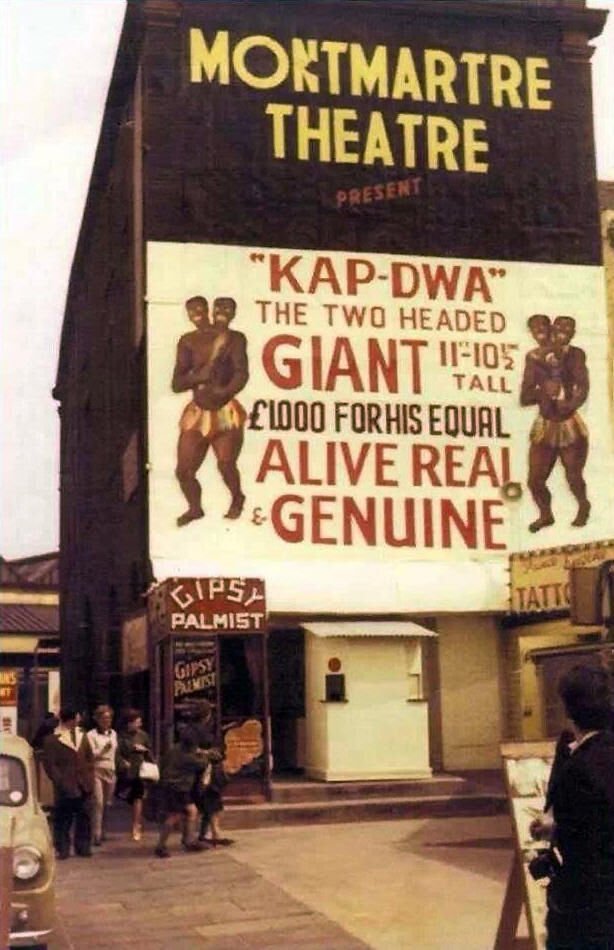 As reported by ancient-code.com Mr. Gerber however, tells a much different story than the above.

According to him, Kap-Dwa was in fact found already dead on a beach with a massive spear in his chest. The creature was mummified by locals in Paraguay—not Patagonia— until an English Captain called George Bickle came across his remains, eventually transporting him to England, to a museum in Blackpool where he stayed on display for several years.

Eventually, the mummified remains were transported back to the Americas to Baltimore.

The conflicting stories may simply be the product of the natural promotion of such an oddity over so many years of sideshow display.

Is Kap-Dwa proof of the giants?

As ufoholic.com reports, there are also several documents from the same time period attesting the existence of giants. One such writing is the Codex Rios, also known as Codex Vatican A.

This manuscript is the 16th century Italian translation of an older document written during the Spanish colonial era.

The script features an intriguing full-page illustration of several Aztec warriors overcoming and executing a gigantic man. Annotations provide the giant’s name – Quinametzin, which translates to One of the Old Ones.

This account and many others support the theory that the American continents were once home to an ancient race of red-haired giants. Legend has it that the giants came from a distant island by crossing the ocean on rafts when a cataclysm destroyed their homeland.

We can find numerous ancient texts and accounts that mention the existence of giants. Some of these texts can even be found in religious books like the bible.

“There were giants in the earth in those days; and also after that, when the sons of God came in unto the daughters of men, and they bare children to them, the same became mighty men which were of old, men of renown.” -Genesis 6:4

The Nephilim are believed to have been the offspring of the “sons of God” and the “daughters of men” before the Deluge according to Genesis 6:4; the name is also used in reference to giants who inhabited Canaan at the time of the Israelite conquest of Canaan according to Numbers 13:33.

“And there we saw the Nephilim, the sons of Anak, who come of the Nephilim; and we were in our own sight as grasshoppers, and so we were in their sight.” -Numbers 13:33.

The existence of Kap-Dwa proves that in the distant past, giants did exist on Earth, and there are still many things that remain unexplained on Earth.

Arranging Your Home to Attract Love