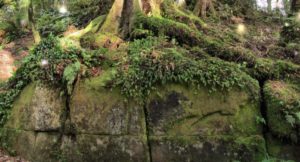 Near the southern end of Lake Taupo, New Zealand there is enigmatic wall called Kaimanawa Wall. The wall is composed of megalithic blocks with symmetrical corners. The level top suggests it may have been a platform pyramid, similar to those found on several islands in the South Pacific.

Until the jungle is cleared and a full excavation takes place, the Kaimanawa Wall remains a mystery. The conversations and speculations about the wall have simmered down. Century-old trees growing through the structure predate it to prehistory and there is no evidence exists that the wall is manmade.

Located immediately south of Lake Taupo, on New Zealand’s North Island, the stone structure is more probably a step pyramid or terraced, ceremonial platform of the kind found throughout ancient Polynesia, although among the very largest examples. 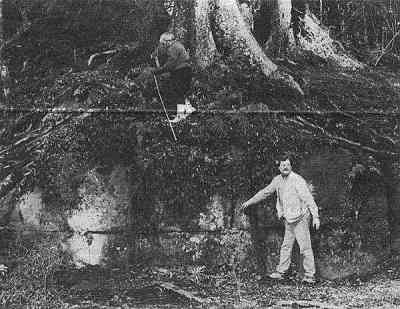 Kaimanawa Wall wasn’t much of a mystery when it was first discovered. Before the 1990s, locals in the area knew of the “wall”. Most of them had dismissed it as natural, weather and water-eroded rock outcropping.

However as trails and roads opened the area to tourists, and more human traffic came through, many visitors were struck by the seemingly smooth blocks stacked atop of each other.

B. Brailsford, of Christchurch, has been the chief investigator of the Kaimanawa wall, aided by American D.H. Childress, and others. Childress, who investigated the site in 1996 when it came to the attention of the outside world, wrote (in A Hitchhiker’s Guide to Armageddon) that:

“…the blocks seem to be a standard one point-eight meters long by one point-five meters high. The bottom block runs straight down to one point-seven meters and beyond. The stone is local ignimbrite, a soft volcanic stone made of compressed sand and ash.

“The nearest outcrop of such stone is five kilometers away. The blocks run for twenty five meters in a straight line from east to west, and the wall faces due north. The wall consists of approximately ten regular blocks that are seemingly cut and fitted together without mortar.”

The wall is topped by a red beech tree 2.9 meters in circumference and over a meter of accumulated humus. According to Brailsford, who was interviewed by the Listener:

“There was no doubt that the stones had been cut. In one place he could insert his arm into a root-ridden cavity and feel the back face — and the front face of the next tier.

“The faces were uncannily smooth, with no saw or adze marks. The interstices where the blocks join were knife-blade thin. Further up the hill, the tops of other stones protruded, suggesting a more extensive structure was buried in the hill.”

For lack of any datable material, the Kaimanawa Wall’s age is elusive, but the Maori, who arrived in New Zealand 700 years ago, were not its builders, because they never erected monumental structures. 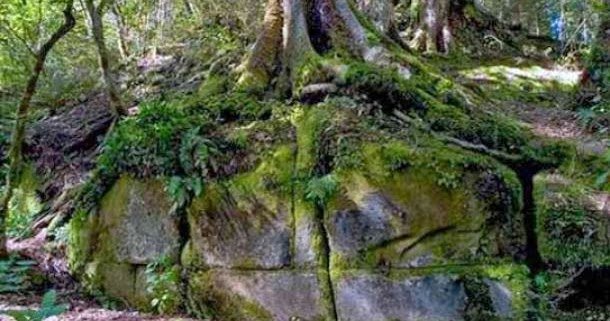 It may have been raised more than 2,000 years ago by the Waitahanui, whose elders apparently preserve some knowledge of the ramparts. The Kaimanawa Wall is almost certainly a Lemurian ruin, part of a ceremonial center created by missionaries or survivors from Mu.

Supporting the contention that a pre-Maori people lived in New Zealand are the bones of the kiore, a type of rat alien to New Zealand, which was likely introduced by the first settlers. Some kiore bones have been dated as 2,000 years old — centuries before the first Maoris arrived.

Needless to say, New Zealand archeologists and anthropologists are not anxious to drastically revise their fundamental paradigm assigning the discovery and colonization of New Zealand to the Maoris.

But Brailsford and Childress are even more iconoclastic: They suggest links to a pre-Polynesian culture; a culture that left similar megalithic structures elsewhere in the Pacific and along the west coast of South America.

The New Zealand Department of Conservation asked Geologist Phillip Andrews to make an assessment of the wall. The department wrote:

“He identified the rocks as the 330,000-year-old Rangitaiki Ignimbrite….he revealed a system of joints and fractures natural to the cooling process in ignimbrite sheets. What Brailsford had taken to be manmade cut, stacked blocks were no more than a type of natural rock formation.”

But to many observers, the blocks in the wall appeared to be too perfect for nature to create. Until now Kaimanawa Wall remains a mystery since there are no satisfied explanations about who built it, and for what purpose.

Sources: Sacred Places Around The World: 108 Destinations by Brad Olsen; The Atlantis Encyclopedia by Frank Joseph;