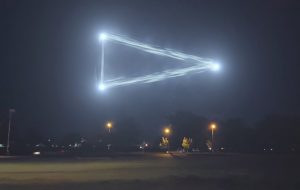 In 1978 strange lights were spotted above New Zealand’s South Island. Although in many ways this might sound like just another UFO sighting, it stands out for a few reasons.

These weren’t just lights – they were described as the size of a building, but more importantly several minutes of the phenomenon were recorded by a professional television crew. Welcome to the Kaikoura mountain ranges…

On the night of December 31st 1978 TV reporter Quentin Fogarty, cameraman David Crockett, Crockett’s wife, and other members of the news crew boarded a flight headed for the skies South of Christchurch New Zealand with the assignment to reconstruct sightings that had taken place earlier in the month, but they got much more than they bargained for when the real thing showed up.

The sightings that Quentin Fogarty and his crew sought to reconstruct took place ten days earlier on December 21st when the crew of a Safe Air Ltd cargo plane reported being “tracked” by strange lights on all sides of their craft.

The lights, which ranged in size from small glints to the size of a house stayed with the Argosy aircraft for several minutes giving all aboard ample time to study them. More than just visual sighting the lights on December 21st appeared on the radar and were recorded at the nearby Wellington Air Traffic Control.

45 miles north of Kaikoura on that same evening hundreds of Cape Campbell residents witnessed three massive lights which sent a beam to the ground while moving as though searching the land for something. These too were recorded by radar at Wellington Air Traffic Control. The three objects creating the light appeared on radar the size of a commercial airliner, yet they moved like a helicopter at low altitude.

To many in the area these sightings were terrifying because two months earlier on October 21st a young pilot named Frederick Valentich was flying into Cape Otway, Australia, just across the Tasman Sea when his small Cessna 182L light aircraft was directly harassed by another mysterious craft, the entire account of which was recorded by air traffic control.

Following his final eerie transmission stating “Ah… Melbourne that strange aircraft is hovering on top of me again… it is hovering and it’s not an aircraft” Frederick Valentich and his entire plane vanished without a trace. The news of his disappearance was still fresh in their minds.

Quentin Fogarty and his crew were above the Kaikoura mountain ranges when they first spotted the lights. The pilot radioed in to Wellington Air Traffic Control with an airspace inquiry not unlike the initial reaction of Frederick Valentich two months earlier. The sighting was confirmed as a solid craft, but its movement was noted as sporadic, then it vanished both from sight and from radar.

After several communications back and forth with the lights appearing and disappearing Wellington Air Traffic Control communicated a chilling message; “There is a strong target right in formation with you. Could be right or left. Your target is double in size.”

To put this into perspective the Argosy aircraft employed by the television crew that evening was an Armstrong Whitworth AW.660 originally intended for military use. It was 86 feet long, had a wingspan of 35 feet, and was over 29 feet in height.

The mysterious craft flying stealthily in formation alongside it yet only visible when illuminated was two thirds the size of a full American football field, and 70 feet longer than any aircraft humanity has ever built. More shocking was that in several instances the craft stood airborne but completely motionless according to air traffic control radar.

At this point tensions were rising rapidly. Wellington ATC had notified the tower at nearby Christchurch airfield and the decision was made to ground Quentin Fogarty’s flight at Christchurch. The landing proceeded without incident, but both radar stations monitored three enigmatic crafts “pacing” back and forth across the Argosy’s path for the duration of the short flight to the airfield.

The New Zealand Air Force put a Skyhawk jet fighter on full alert in the hopes of intercepting the craft or crafts, but they had already vanished. A thorough investigation was launched that included a near complete dissection of the radar equipment, but no trace of malfunction could be found.

Soon after the details of the investigation were classified as top secret by the Royal New Zealand Air Force and are now stored at the National Archives in Wellington.

In a recent interview Bill Startup – a pilot with 23 years of experience, 14,000 hours of flying time, and pilot of the Argosy that night in 1978 stated: “People can think about that, but they weren’t on the aircraft.

None of those involved are satisfied with any of explanations given by scientists and government officials.”