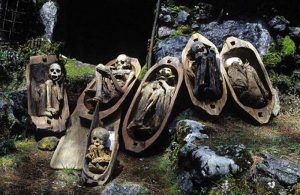 The Philippines Ibaloi peoples had one of the world’s most elaborate burial practices, a process that looked more like cooking a meal than burial, but could take up to two years. The tombs of these remains have been hidden from the world for thousands of years until a logging crew stumbled on caves packed with egg – shaped wooden containers in the 1970s. Some of the most cruelly preserved bodies were inside the containers. Welcome to the Kabayan Burial Caves…

As the full process of mummification took up to two years of intensive ritual practice and herbal preparation, the Kabayan Fire Mummies were generally only the deceased from the absolute highest spectrum of the Ibaloi social ladder. Using salt and herbs, the bodies of the deceased would be prepared both internally and externally using a mixture of salt and herbs.

Once properly marinated the bodies were placed under a fire allowing low heat to cure the flesh and drain the body of all fluids. After two years of this process the bones of the newly made mummy would be pliable enough to be contorted into a tight fetus position and squeezed into a small pinewood coffin resembling an egg.

The exteriors of these egg-shaped coffins were intricately etched with anthropomorphic depictions of ancient Gods and the world of man. The depictions often portray a legend or story that in many cases can be read continuing from one coffin to the next. Despite having a complex and rich pantheon of deities, the Ibaloi were often more concerned with earthly forces, and these most commonly included monsters.

From what we’ve seen from other regions of the Philippines, the Filipino jungles have a true talent for generating the most disturbing of mythical creatures, and in some cases cryptids that are considered all too real by the locals, creatures that tear themselves in half to take flight and suck fetuses from the bellies of pregnant women. It’s no surprise that these earth bound monsters were a somewhat pressing issue for the Ibaloi.

For an estimated three thousand years the process would be repeated with one corpse after another, the egg shaped coffins stored in man-made caves dug from the cliffs of the Benguet Mountains. In the 1500s the Spanish arrived and conquered the Philippines.

The Spanish were not particularly approving of cooking your ancestors for two years then storing them in eggs, and the practice was strictly outlawed. By this time there were already more than 200 man-made burial caves containing thousands of fire mummies.

In the mid-1960s to 1970s logging operations in the Philippine’s region of Luzon, which includes Kabayan, had increased dramatically, which in turn led to the discovery of the first burial cave. Unfortunately it took some time for local Philippine cultural preservation societies to take action, and for the often corrupt Filipino government to care.

In this time the Kabayan Burial Caves suffered extreme looting and today only fifteen of the burial caves contain mummies at all. The other way of saying it, is that somewhere out there, are thousands of little cooked corpses contorted into eggs possibly decorating the homes of the less ethical and affluent.

Enriqueta Marti: Child Killer Known As The Vampire of Barcelona