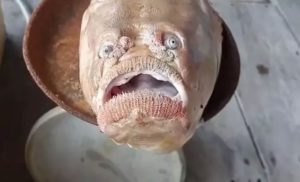 A fisherman in Thailand was stunned when he caught a fish with an eerie “human face”. Local fisherman Prasert Shukul reportedly caught the strange fish while catching blue crabs in the Andaman Sea.

Pulling out the net, the fisherman was stunned to see a fish with “the face of an ugly man.”

This sight was so creepy that Shukul even thought about throwing both the fish and the net back into the water. However, he decided instead to bring the creature to his village in the hopes that someone could identify it, but even the elders of the community had never seen anything like it.

A fish with a human face caused such a commotion in the village of Shukula that news of a strange creature reached the local maritime center, which sent a team of experts to his home to investigate the matter.

According to wildlife experts who examined the animal, it was likely a Pollicaris fish. But experts are not 100% sure.