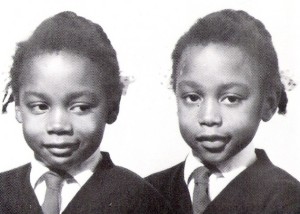 June and Jennifer Gibbons (born 11 April 1963) were identical twins who grew up in Wales. They became well known as “The Silent Twins” because they only communicated with each other.

They started writing works of fiction but turned to crime in a bid for recognition. Both women were committed to Broadmoor Hospital where they were held for 14 years.

June and Jennifer were the daughters of West Indian immigrants Gloria and Aubrey Gibbons. Gloria was a housewife and Aubrey worked as a technician for the Royal Air Force. Shortly after their birth in Barbados, their family moved to Haverfordwest, Wales.

The twin sisters were inseparable and their particular high-speed patois made it difficult for people outside their immediate family to understand them.

As the only black children in the community, they were ostracized at school. This proved traumatic for the twins, eventually causing their school administrators to dismiss them early each day so that they might avoid bullying.

Their language became even more idiosyncratic at this time. Soon it was unintelligible to others. Their language, or idioglossia, qualified as an example of cryptophasia, exemplified by the twins’ simultaneous actions, which often mirrored each other. Eventually the twins spoke to no one except each other and their younger sister Rose.

When the twins turned 14, a succession of therapists tried unsuccessfully to get them to communicate with others. They were sent to separate boarding schools in an attempt to break their isolation, but the pair became catatonic and entirely withdrawn when parted.

When they were reunited, the two spent a couple of years isolating themselves in their bedroom, engaged in elaborate play with dolls. They created many plays and stories in a sort of soap opera style, reading some of them aloud on tape as gifts for their sister.

Inspired by a pair of gift diaries at Christmas 1979, they began their writing careers. They sent away for a mail order course in creative writing, and each wrote several novels.

Set primarily in the United States and particularly in Malibu, California, an excitingly exotic locale to romantic girls trapped in a sleepy Welsh town, the stories involve young men and women who exhibit strange and often criminal behaviour.

In June’s Pepsi-Cola Addict, the high-school hero is seduced by a teacher, then sent away to a reformatory where a homosexual guard makes a play for him.

In Jennifer’s The Pugilist, a physician is so eager to save his child’s life that he kills the family dog to obtain its heart for a transplant. The dog’s spirit lives on in the child and ultimately has its revenge against the father.

Jennifer also wrote Discomania, the story of a young woman who discovers that the atmosphere of a local disco incites patrons to insane violence. She followed up with The Taxi-Driver’s Son, a radio play called Postman and Postwoman, and several short stories. They wrote in a unique personal style, often with unwittingly amusing word choices.

Their novels were published by a self-publishing press called New Horizons, and they made many attempts to sell short stories to magazines, but were unsuccessful. A brief fling with some American boys, the sons of a U.S. Navy serviceman, led nowhere.

The girls committed a number of crimes including arson, which led to their being committed to Broadmoor Hospital, a high-security mental health hospital. There they remained for 14 years.

Their medications were apparently adjusted sufficiently to allow them to continue the copious diaries they had begun in 1980, and they were able to join the hospital choir, but they lost most of their interest in creative writing.

The case achieved some notice due to newspaper coverage by The Sunday Times journalist Marjorie Wallace. The British tabloid The Sun gave a brief but accurate account of their story, headlined “Genius Twins Won’t Speak” (an apparent reference to their having tested above average intelligence when being considered for Broadmoor Hospital).

According to Wallace, the girls had a long agreement that if one died, the other must begin to speak and live a normal life. During their stay in the hospital, they began to believe that it was necessary for one twin to die, and after much discussion, Jennifer agreed to be the sacrifice.

In March 1993, the twins were transferred from Broadmoor to the more open Caswell Clinic in Bridgend, Wales; on arrival Jennifer could not be roused. She was taken to the hospital where she died soon after of acute myocarditis, a sudden inflammation of the heart.

There was no evidence of drugs or poison in her system, and her death remains a mystery. On a visit a few days later, Wallace recounted that June “was in a strange mood. She said, ‘I’m free at last, liberated, and at last Jennifer has given up her life for me.'”

After Jennifer’s death, June gave interviews with Harper’s Bazaar and The Guardian. By 2008, she was living quietly and independently, near her parents in West Wales. She is no longer followed by psychiatry services; accepted by her community, she seeks to put the past behind her.

Titanic Survivor That Was Branded a Coward