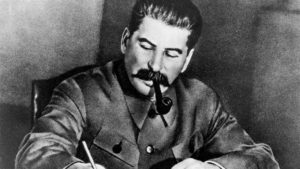 The occult background of the Soviet rule has been discussed no less than the legendary occult of the Third Reich, reports pravdareport.com.

What role has Joseph Stalin, who ruled the country of “victorious socialism” for nearly 30 years, played in it? Was he an ordinary tyrant, or did he have the unknown forces behind him? Unfortunately, we only have some random facts at our disposal.

It is known, for example, that Stalin attended Tiflis Theological Seminary, along with the future famous magician, philosopher and occultist Georgi Gurdjieff, and at one time was friends with him. There is also a theory that Joseph Dzhugashvili was a part of some kind of an occult “eastern brotherhood” that consisted of Gurdjieff and his followers.

The sources talking about Gurdjieff mention a mysterious figure, prince Nizharadze. This was a pseudonym of the man whose essence was replaced on an energetic level, which turned him into a zombie. Gurdjieff describes an expedition to the Persian Gulf, whose members included him and Prince Nizharadze.

He mentions that the “prince” on the way fell ill with fever, which made the travelers stay for a month in Baghdad. It is known that in 1899-1900 Dzhugashvili worked in Tiflis geophysical laboratory, so in theory he could have taken part in this expedition. The leader’s face was covered with pockmarks – could it be a side effect of the “Persian” fever?

The party leader’s nickname – Koba – also raises some questions. Translated from Old Slavic Church, it means “sorcerer” or “prophet.” This was the name of the Persian king Kobadesa, who at the end of the 5th century conquered Eastern Georgia.

Byzantine historian Theophanes says Kobades was a great magician and head of the sect with the ideals close to those of the communism, for example, division of property into equal parts to eliminate rich and poor.

In the Stalin’s era the state security services created an entire department dedicated to the search for the signs of extraterrestrial civilizations and ancient cultures. The Bolsheviks needed knowledge and technology that could make their power invincible.

They also say that in 1941 Stalin secretly visited the famous Moscow blessed Matrona (Matrona Dmitrievna Nikonova). According to one theory, Matrona said to Stalin: “The Red Rooster will win. Victory will be yours. You are the only boss who will not leave Moscow.”

According to another theory, she slammed the leader with her fist on the forehead with the words: “Moscow does not give up, think, think, and as soon as Alexander Nevsky comes, he will lead everyone behind.”

The government at the time used a famous hypnotist Wolf Messing. They say that once Stalin summoned him and ordered him to get 100,000 in a bank using a clean piece of paper.

He had to convince the cashier that he sees a check for 100 thousand, but when the experiment was completed, and the cashier saw a blank sheet instead of a check, he suffered a heart attack. Messing’s other task was to go to Beria’s office without a pass, bypassing security guards. He performed it without difficulty.

There is also evidence that the “leader of the people” possessed magical knowledge and extraordinary abilities. Parapsychologists say that the majority of portraits depict Stalin with a pipe because the tobacco smoke was Stalin’s magical defense that did not let the “others” into his aura.

Daniel Andreev in his “Rose of the World” claimed that Stalin was able to enter into a special state of trance – hohha – that allowed him to see the deepest layers of the astral world.

The leader used to go to bed just before dawn, because he could only get into his astral body at certain times, when the night was running out. In these moments even the appearance of Stalin would change – his wrinkles would disappear, his skin would smooth out, and his cheeks would blush.

Stalin needed Hohha to get energy, as well as to predict future events. This way, Stalin found out what kinds of trouble or danger might threaten him, and tried to prevent them.

According to Andreev, during a trance, Stalin also communicated with spirits and demons. Mass executions were no more than sacrifices to these astral beings. This is why Joseph Stalin managed to stay in power longer than any other Soviet ruler.