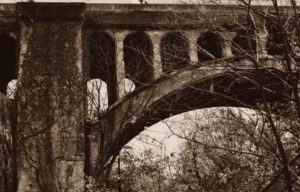 Downieville California is a picturesque little town nestled high up in the Sierras. Situated where the Downie River and the Yuba River merge, Downieville’s quaint beauty belies the story of the haunted Jersey Bridge.

Today the sleepy little town of Downieville has a population of approximately 325. But back in the early 1800’s, thanks to the discovery of gold in the area, nearly 5000 people came to town in search of gold.

One such couple was the beautiful young Josefa Segovia, also known as Juanita and her husband. By day the pair panned for gold in the icy rivers, by night he bartended while she danced and told the curious their fortunes.

Theirs was a hard, but happy life, and it may have continued on for years, if not for a townsman by the name of Jack Cannon who fell for the raven-haired Juanita.

Try as she might, the young woman could not dissuade her would be suitor. Not the fact she was married or the threat of a beating by her husband could keep the man from pursuing her. Unfortunately he hadn’t reckoned on Juanita’s fiery temper and prowess with a knife.

One evening while she was home alone the man forced his way into her little house and tried to persuade the young wife to abandon her husband and run away with him. Angrily Juanita yelled at the intruder to get out and stay out. He grabbed her arm and shoved her to the floor.

But she was a fighter and quickly sprung to her feet. In a fury she scratched his face. He slapped her to the floor a second time. That was enough for Juanita. She pulled a knife from the cupboard and thrust it into the man’s chest. He managed to stumble out of the house where he toppled over mortally wounded.

Passersby tried to aid the man, but he was beyond all earthly help. When the news of his death was announced the townspeople were stunned. He was a well-liked man who’d grown up in the area and she was a young Spanish woman who spoke in a language most of them could not comprehend.

It mattered little that he’d broken into her home and accosted her. How dare Juanita to have had the audacity to kill him.

The poor woman was hustled off to the jail where an angry mob soon formed demanding she be lynched. Her husband spoke with her then tried to reason with the crowd. But his words fell on deaf ears.

A mock trial was held with twelve townspeople acting as judges and jurors. One man stepped forward and attempted to defend the young woman in the ridiculous court. But, it was to no avail. 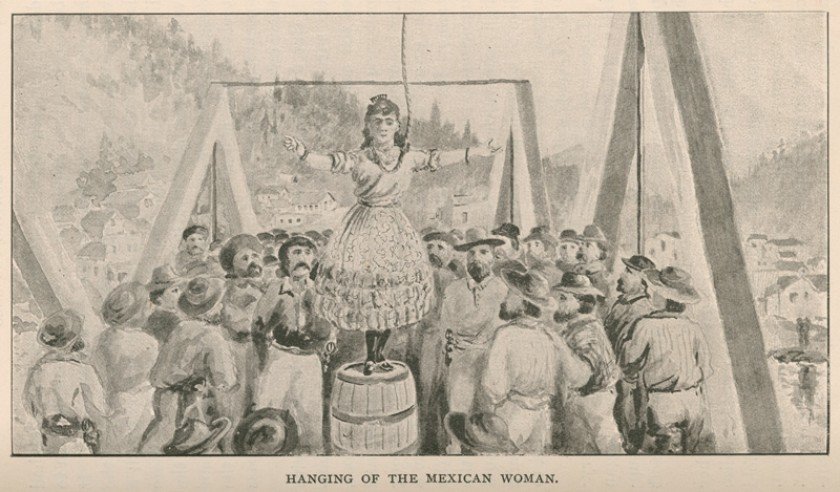 Two days later on a sweltering July morning in 1851 Juanita was dragged from the jail and hanged on Jersey Bridge. With her death, Juanita made history; She was the first and only woman to be hanged in the state of California.

Her husband was told to either be out of town by sundown or suffer a similar fate. What became of him after he left Downieville is uncertain. Juanita, on the other hand, was buried in an unmarked grave in the cemetery and has decided to stay on the bridge in Downieville.

Even though the actual wooden bridge she was hanged on has long since been replaced, she is still there near the spot where she died. Over the years several people have seen Juanita’s lonely apparition weeping softly on the bridge. 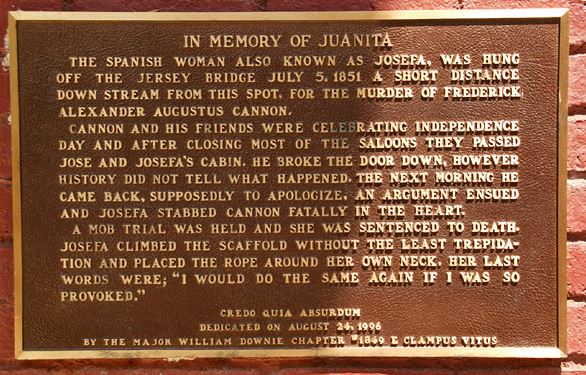 Some have even had the disquieting experience of having Juanita’s ghost approach them and attempt to tell them something. No one will probably ever know for sure what she is trying to say, but that doesn’t stop her from trying.

If you’re ever in the area you may want to stop in Downieville and visit Jersey Bridge, the gallows (actually used for a hanging) the museum, and all the other interesting things to see and do in town.