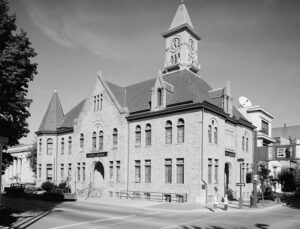 The city of Johnstown, in Cambria County, is synonymous with tragedy; in 1889 it was the scene of one of America’s greatest disasters.

While the Johnstown Flood claimed over 2,200 lives, the city has also been the scene of countless smaller, lesser tragedies– personal tragedies to which no monuments or bronze markers have been dedicated.

One such tragedy is the suicide of a teenager girl named Katherine Winsky, who, in 1907, took her own life in the corridor of City Hall.

Situated on the northeast corner of Main and Market Streets, the Johnstown City Hall is a handsome and remarkable example of the Richardsonian Romanesque architecture which flourished throughout the United States in the late 19th century.

The original city hall in Johnstown, built in 1872, stood just seventeen years before it was completely destroyed by the flood.

The city’s leaders, determined to rebuild, awarded Charles Robinson on Altoona the contract to design a new municipal building for the city– one that symbolized the modern and progressive nature of Johnstown.

Construction on the current Johnstown City Hall didn’t begin until 1900– a time when the leading architects of the East Coast had already abandoned the Richardsonian Romanesque style in favor of Spanish Colonial, Byzantine Revival, and the budding Chicago School Style or “Commercial Style” that embraced new technologies like steel-frame construction.

Ironically, by the time architect Charles Robinson unveiled his design for the Johnstown City Hall, his design was already outdated. Nevertheless, the residents of Johnstown took great civic pride in their new city hall when construction was completed in 1902.

Five years later, on the afternoon of Thursday, May 16, 1907, a sixteen-year-old girl stood in the hallway of the building with tears in her eyes. Her father, who was about to be taken to jail, had just said his goodbyes.

When she was certain that nobody was looking, Katherine Winsky withdrew a small bottle of carbolic acid which she had hidden beneath her clothing, and drank the poison.

The act did not go unnoticed, however; a small child who witnessed the teenager’s actions raced off to find a policeman, and Katherine was rushed to a nearby hospital, where every attempt was made to save her life– but to no avail. 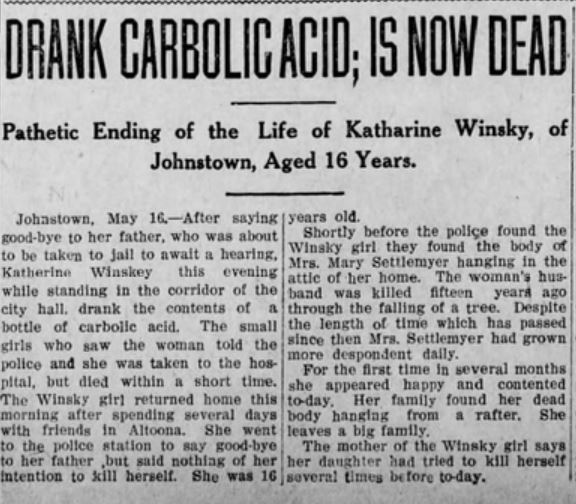 Today, the Johnstown City Hall is still a busy place where city council meetings are held and budgets are discussed, where day-to-day official business is conducted, where the occasional out-of-town tourist stops to ask for directions, or to snap photographs of the handsome clock tower.

At first glance, the city hall building seems to be a shrine to the mundane activities that make up ordinary, everyday life.

But if you ask some of the locals who visit the building frequently, or some of the city officials who spend a great deal of time working there, a few might tell you about the mysterious, unexplained sounds that can often be heard during the sporadic moments of inactivity.

“Every once in a while, if you’re listening just right, you can hear the sound of something rolling on the ground,” said one of the security guards.

Marlin Bressi asked him if, by any chance, it sounds like a glass bottle rolling across the floor. “Yes, that’s exactly what it sounds like,” he replied with a nod.

“Funny thing is,” he added, “I’ve tried to locate the source of the sound for years, but I have never found it.”