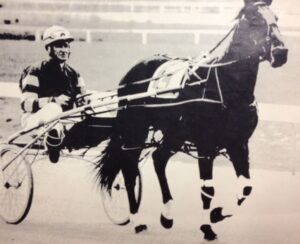 John Godley’s dream-run of the horse racetrack began on the night of Friday, March 8, 1946, when he was a student at Balliol College, Oxford University. He dreamed that he was reading the horse racing results in Saturday’s newspaper and saw the names of two winners – Bindal and Juladin.

The next morning he told a friend about his dream, and together they consulted the sports pages in Saturday’s newspapers. The two horses were running, in separate races, later that day. Godley backed both horses, as did other friends he had told about his dream. Both horses won.

Several weeks later, just before the Grand National race on April 3, 1946, Godley was at his parents’ home in Ireland when he had his racing dream again. This time he was looking at a list of winners.

When he woke up, he could recall only one of them – Tubermore. He discovered that a horse called Tuberose was running in the Grand National the following day. The similarity of the two names was good enough for Godley and his family.

That horse, Tuberose, was up against odds of 100-6. Godley, with his brother and sister acting as witnesses, bet three pounds on Tuberose, and it won, returning over 60 pounds to Godley.

“I had never heard of Tuberose before that day. It was an unconsidered outsider. I have watched its fortunes since, and it has never won another race,” said Godley.

The next dream occurred on July 28, 1946. In it Godley was calling his bookmaker from a pay phone, and his bookmaker was saying that Monumentor had won. Next morning Godley checked the newspapers. There was a horse called Mentores running that day. He backed it and it won.

A year later Godley had his fourth special dream. This time he was at the races and saw that the winning horse carried the distinctive racing colours of the Gaekwad of Baroda, an Indian prince, and that the jockey was an Australian, Edgar Britt.

Godley also heard the crowd shouting the name of the favourite for the next race – The Bogie. Godley checked the newspapers and found that the prince’s horse was running that afternoon and that the jockey was Edgar Britt.

He also discovered that the favourite in the next race was named the Brogue. By now Godley took the matter seriously and wanted to be able to provide evidence that he could accurately predict the outcome of the races.

He deliberately told two close friends about the dream, wrote down his predictions, had them witnessed, and left the statement at the local post office for safekeeping. He backed both horses. They both won. The news spread around the world. The dreamer became racing correspondent on the London Daily Mirror.

In that year he had a succession of winning dreams, including the Grand National winner, ‘Mr. What.’ Afterwards, once again, the gift departed and this time, it never returned.

Godley’s astonishing case is supported by a large number of testimonials. Many of his predictions were told to his fellow undergraduates before the races were begun; at least one was written down, witnessed and sealed away.

He had no idea why he should have demonstrated such a gift in such a way except that he was mildly interested in horses and, like all impecunious students, had a strong motivation to back winners.

There can be little doubt that Godley’s predictive dreams demonstrated evidence of a precognitive faculty at work. Perhaps the most interesting feature of his dreams, from a psychological standpoint, is the fact that he always dreamed of reading or hearing the results of races, and never “saw” the races themselves in his dreams.

This is a common feature of precognitive dreams and premonitions, and hints, perhaps, at some kind of unconscious censorship.

It may be, in other words, that the unconscious mind blocks direct access to information that is “not allowed”, and that this information can only pass through the unconscious censor by taking a form that is more commonplace and acceptable – that is, in the shape of “second hand” information reported in a newspaper or on the radio. In effect this absolves the dreamer of any blame for accessing this “illicit” channel of information.

Sources: 36 Unsolved Mysteries of the World by Vikas Khatri; A Paranormal File by John Pinkney