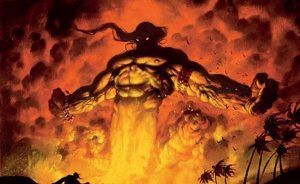 The jinn (sometimes spelled djinn) are spiritual beings according to Islamic mythology. Even the Holy Quran mentions them. We in the West know them as genies.

Far from being like the funny cartoon character in Disney’s Aladdin, the jinn are considered to be creations of God along with angels and humans. So who exactly are the jinn?

HISTORY AND ORIGINS OF THE JINN

The word jinn itself is Arabic in origin and its root means “hidden or concealed.” It refers to a class of spirits below the angelic hierarchy.

These beings were known in ancient Middle Eastern times and often worshiped as benevolent and rewarding gods. Archeologists have even discovered stone carvings and inscriptions giving praise and thanks to them.

According to Islam, God created three categories of beings: angels who were created from light, the jinn who were formed from fire and humans made from earth or clay.

Along with humankind, God also bestowed free will upon the jinn, letting them live and do as they please. Yet they are subject to the same punishments and Day of Judgment as people.

There is even a story about one of the jinn, called Iblis who disobeyed Allah’s order to bow down to Adam. As punishment, Iblis was banished from Paradise and known as Shaitan or Satan, the adversary.

Finally the jinn were popularized due to the success of the book One Thousand and One Nights also known as Arabian Nights. Readers were introduced to stories of jinn that coexisted and communicated with humans.

TYPES OF JINN AND HUMAN INTERACTION

Like humans, the jinn also have male and female genders. And just like people, some are benign and some are malevolent, with many falling somewhere in-between.

They may or may not interact with us, just like any other spiritual being. According to some beliefs, each one of us is assigned a personal jinni called a qarin. For those unfortunate souls who have an evil qarin, they are likely to hear whisperings impelling them to do evil.

Although local legends and lore often have their own unique forms of jinn, the major types of jinn include: Ghul, Ifrit, Marid, Nasnas, Shaitan, Shiqq and Silat.

The ghul or ghoul is a nocturnal zombie-like shape shifter that often haunts graveyards. It preys on human flesh and is capable of great evil.

According to Arabian lore, the most feared ghul is female, known as a ghula who can appear as a mortal woman and lure men into her clutches, turning them into her prey.

These jinn are cunning and extremely intelligent. Generally evil, they do have the ability to change and can become pious and saintly. The Holy Quran mentions the power that King Solomon had over the ifrit, making them do his bidding.

The marid are the genies we’ve come to know and love as wish granting spirits that live in oil lamps and bottles. They are actually considered the most powerful of the jinn.

Blessed with great knowledge and magical powers, they were originally known as sea-spirits and still spend a great deal of time near the water.

Nasnas are a lesser form of jinn with weaker powers. They often appear as human or animal-like hybrids. In the classic One Thousand and One Nights, nasnas appear as a half-bodied humans hopping around on one leg.

As mentioned before, Shaitan was the name given to Iblis who disobeyed Allah. Shaitan also refers to any malevolent jinni that aligns with demonic forces.

Like the nasnas, the shiqq are also a lower form of jinn and are only half-formed. They appear as hideous monsters, but have weak powers.

Smartest of all the jinn, the silat are expert shape shifters and are the most interested in humans. They love to take on the human form and can do so with ease.

So if a magical stranger either helps you out or brings you trouble, it could be a silat.