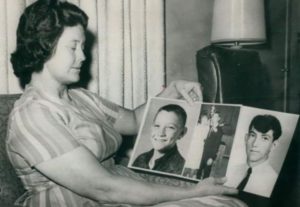 Janie Lou Gibbs murdered her husband, three children, and a grandson by poisoning them with arsenic so she could collect on the life insurance policies she had on each victim. She was from Cordele Georgia and appeared to be a devoted wife and mother who spent much of her free time at her local church.

Gibbs’ husband of 18 years, Charles Clayton Gibbs, 39, died suddenly at home after enjoying one of Janie’s home-cooked meals on January 21, 1966. Doctors concluded a previously undiagnosed liver disease caused his death. The show of sympathy to Janie Lou and her three children from the church was overwhelming.

So much so, that Ms. Gibbs decided to give part of Marvin’s life insurance money to the church to show her appreciation for their stellar support. With Charles gone, Gibbs and her children carried on together as best as they could, but within a year tragedy struck again.

Her youngest son, Marvin, age 13 seemed to have inherited his father’s liver disease and after collapsing with severe cramps, he too died on August 29, 1966.

Again, the church community came together to support Gibbs through the painful death of her young son. Gibbs, appreciative of the support given to her and her family gave a portion of Marvin’s life insurance payment to the church.

Just a few months later, her 16-year-old son Lester Gibbs began complaining of dizziness, headaches and severe cramping. He died before ever getting to the hospital on January 23, 1967. Doctors decided the cause of death was hepatitis. With disbelief but with the usual sympathy and support, the church helped Gibbs through her terrible loss.

Gibbs, now seemingly brokenhearted having endured such heartache over the last 2 years, again offered a portion of young Lester’s life insurance payment to the church in appreciation of the support given to her.

Her last and oldest son, Roger, was married and the birth of his son, Raymond seemed to lift Janie out of despair. However, within a month both Roger and his perfectly healthy newborn son were dead. Roger Ludean Gibbs, 19, died in the same fashion as his father and brothers. On October 28, 1967.

Although insurance adjusters were suspicious, most of Gibbs’ neighbours and friends from the church could not believe that the 35-year-old mother could be a killer.

However, Gibbs’ daughter-in-law demanded an autopsy of her husband Roger. The autopsy found fatal levels of arsenic in the young man’s body. The death had previously been attributed to liver disease, but she was eventually arrested on Christmas Eve in 1967.

The court ordered the rest of her family to exhumed and each was found to have been murdered. She admitted methodically feeding rat poison to her family one victim at a time, but did not give a motive.

She inherited $31,000 from their deaths and tithed 10 percent to her church. In February 1968 she was found to be insane and served time in a state mental hospital until 1976.

Gibbs, who in later years suffered from Parkinson’s disease, was released in April 1999 on a medical reprieve into the custody of her brother and sister-in-law after being denied parole more than 17 times.

She remained on parole and was required to check in once a year due to her deteriorating condition. She used a wheelchair and lived in a nursing home in Douglasville, Georgia until her death on February 7, 2010. She was diagnosed as clinically insane.

The Story Of The Execution Of A Clairvoyant