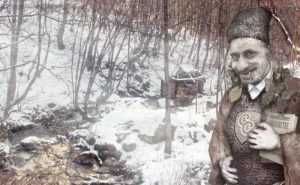 Deep within the Zarozje forests of Serbia there was a small water mill that stood for 300 years. It was a cursed place where locals would not visit past nightfall as it was home to possibly one of the first well documented vampires.

Local folklore dating back to the late 1700s tell of the numerous victims lured to the mill after nightfall only to be found the next morning, their blood drained, and a look of terror frozen to their lifeless faces.

The stories tell that one day after a century of killings the curse and the vampire simply vanished, but according to the town council of Valjevo, it has come back. Welcome to Jagodići’s Watermill, home of the vampire Sava Savanović…

Contrary to what you might have been told vampire legends did not begin in Transylvania or Romania, but in fact began in Serbia. Many of these tales, although very localised to specific villages, pre-date the Ottoman occupation of Serbia in the 9th and 10th centuries.

The first time the world heard the word “vampire” was in the early 1700s when Austrian forces returning from conquests in Ottoman Serbia returned with reports of monsters that hid amongst the towns’ people and decimated entire armies, draining soldiers of their blood in seconds, only to vanish and reappear beside their next victim a moment later.

In 1730 when the first report arrived that one of these creatures had been killed and was in fact a physical being, the Austrian army sent a military surgeon into Serbia to conduct autopsies on the creatures and develop strategies for combating what had become a plague within their ranks.

Those familiar with vampire lore know that the vampires the Austrians were hunting were the underlings of the vampire broods, infected spawn of the “vampire princes”. Sava Savanović was one such vampire prince. His days amongst the living are uncertain, some say that he died recent to the killings of the late 1700s, others say he died many hundreds of years before that and this period was the second feast.

At the time of what some consider the second feast, the watermill was a small community maintained mill where the locals would grind and prepare their grains, but never after nightfall. The stories tell that some unfortunate villagers would arrive home with their grains to find that their sack also contained a living butterfly and that the grains themselves had somehow rotted in the course of an afternoon.

Assuming that they had taken with them the wrong sack the villager would return to the mill and subsequently find himself lost and alone in the forest at night, the latest victim of the vampire Sava Savanović.

Long after the killings had ended, the mill was purchased by the Jagodić family and it was passed from generation to generation without incident. If the killings of the late 1700s were in fact the second feast, Sava Savanović was once again asleep for centuries. Over those centuries the mill slowly fell into a state of disrepair.

With a strong belief that the vampire prince rested below its foundations no villager or member of the Jagodić family dared repair it for fear of waking the hunter that slept below.

In 2012 the mill finally collapsed. The town council of Valjevo began receiving reports of a tall man shrouded in darkness stalking the village’s outskirts, and of strange sounds, growls, neither animal nor human coming from the surrounding forests at night.

When the town mayor himself witnessed the shadow of a man floating through the treeline it was decided that Sava Savanović had awoken and that a new feast was about to begin. A formal warning was issued by the town council of Valjevo for the locals to take up appropriate protections and stay within their homes after nightfall.

There are of course those that speculate the formal warning is more of a tourism ploy than a warning, but one must understand that in the region of Zarozje they do believe entirely in the existence of vampires, and a statement such as this from the town council terrifies to the point of mass panic.

Despite speculation or history, the question remains… are we about to witness the first modern account of a vampire plague? After all, if vampires are real and the stories of centuries’ slumber between feasts are accurate, they had to wake up some time.