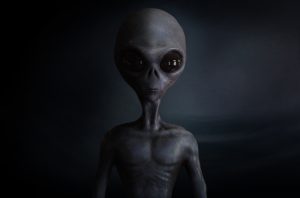 With the administration of the American paranormal site “Singular Fortean Society” recently contacted a young resident of Jacksonville, Wisconsin, and spoke about the terrible attack of a typical gray alien, which happened right in her house.

It happened in the spring of 2018. That evening, the 21-year-old girl fell asleep from fatigue right on the sofa in the living room, and not in her bedroom. But in the middle of the night she was awakened by a bright light.

“I woke up suddenly from very bright light and saw that it was going through a small window at the top of the entrance door.

At first, I thought that maybe the light in front of the door was turned on by my sister, with whom I rented an apartment. But when I came to the door, I thought that it could be a robber.

And this moment I face to face with this gray creature with big black eyes. It stood in the doorway and looked like a typical Gray stranger. I am 5 feet and 6 inches (167 cm) tall, but it was only a little bit lower than me, that is, about 5 feet 5 inches (165 cm).”

From strong fear, the girl screamed loudly, and the alien in response began to shout at her and his voice sounded very strange, looking like a bird’s cry.

“I screamed at him, and he yelled at me, as if he, too, was scared, not expecting to see me. And then I rushed to the kitchen to go up to my sister’s bedroom.”

But when the girl was already in the kitchen, the stranger hit her with some kind of energy weapon.

“It is very difficult to describe. It was something electric, but with vibrations and I was completely paralyzed. The whole room became illuminated by a bright light and pulled me back onto the sofa in the living room.”

The girl could not move her hand or foot, but saw and felt everything. Her whole body tingled a little from the blow of the weapon, and the light in the room was pale blue.

“I didn’t lie down on the sofa, I swayed in the air above him, levitated! And then suddenly my body sank down and … it was as if I woke up and everything was as usual, like nothing was happening.

But the girl understood that it was not a dream. Even when she hung in the air above the sofa, she tensely inspired herself not to forget anything, since all this is in reality.
She still doesn’t remember anything beyond what was described, but she hopes that maybe the memory will start to return gradually and she will remember something else that happened that night.

She also did not find any strange marks on her body that are usually found by the victims of alien abductions, but she is still sure that she really saw the newcomer and everything that happened was neither a dream, nor hallucinations, nor a sleep paralysis.