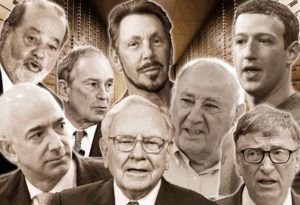 Just 62 individuals now hold the same amount of wealth as 3.6 billion people, the bottom half of the entire planet — a shocking statistic made even more alarming when considering as recently as 2010, that same half of all wealth was held by 388 people. Now, 80 billionaires collectively hold over $2 trillion, while the bottom half has lost $1 trillion of their wealth — in just five years.

A report published by Oxfam International — tellingly titled, An Economy For The 1% — reveals a number of jaw-dropping figures that illustrate the struggles resultant from such an exponential increase in the stratification of wealth. According to the study:

“The global inequality crisis is reaching new extremes. The richest 1% now have more wealth than the rest of the world combined. Power and privilege is being used to skew the economic system to increase the gap between the richest and the rest. A global network of tax havens further enables the richest individuals to hide $7.6 trillion. The fight against poverty will not be won until the inequality crisis is tackled.”

In only five years, those 62 billionaires saw their wealth grow 44% — an increase of $542 billion — to a whopping $1.76 trillion. And, of course, the flip side of this concentration of money at the top meant “the wealth of the bottom half fell by just over a trillion dollars in the same period — a drop of 41%.”

Half of all global wealth accrued just since the year 2000 ended up in the hands of the 1%, while the poorest half of the planet’s population split a meager 1% of that increase. In nearly 25 years, Oxfam further revealed, the income of the world’s poorest 10% has risen by less than a single cent per day — an increase of less than $3.00 each year.

On average, each adult belonging to the richest 1% on Earth has wealth totaling $1.7 million — a figure 300 times greater than the average held by 90% of people on the planet, “although for many people in the bottom 10 percent their wealth is zero or negative.”

But the poverty-fighting group doesn’t stop with simply listing figures; instead, Oxfam issued a scathing explanation of how such wealth and income disparities became reality.

“Far from trickling down, income and wealth are instead being sucked upwards at an alarming rate. Once there, an ever more elaborate system of tax havens and an industry of wealth managers ensures that it stays there, far from the reach of ordinary citizens and their governments. One recent estimate is that $7.6 trillion of individual wealth — more than the combined gross domestic product (GDP) of the U.K. and Germany — is currently held offshore […]

“Economic policy changes over the past 30 years — including deregulation, privatization, financial secrecy, and globalization, especially of finance — have supercharged the age-old ability of the rich and powerful to use their position to further concentrate their wealth […]

“A powerful example of an economic system that is rigged to work in the interests of the powerful is the global spider’s web of tax havens and the industry of tax avoidance, which has blossomed over recent decades.

“It has been given intellectual legitimacy by the dominant market fundamentalist world view that low taxes for rich individuals and companies are necessary to spur economic growth and are somehow good news for us all. The system is maintained by a highly paid, industrious bevy of professionals in the private banking, legal, accounting, and investment industries.”

Though there exist perfectly justifiable arguments for the elimination of taxation, in the meantime, these elites and über-rich individuals — and often their corporations — exploit the system for personal benefit in a way not possible for the rest of us.

By throwing money into political campaigns, think tanks, lobbying firms, and other means of influence, the ultra-wealthy retain the ability to form policy by proxy. Both dark money and overt funding pressure politicians into legislating for the few.

As Jared Bernstein of the Center on Budget and Policy Priorities recently pointed out, “There’s this notion that the wealthy use their money to buy politicians; more accurately, it’s that they can buy policy, and specifically, tax policy.”

In fact, in an analysis of 200 top companies, including the World Economic Forum’s strategic partners, as well as picks from some of the world’s largest businesses, Oxfam found nine in ten “have a presence in at least one tax haven” — and with just 50 big banks managing the bulk of “offshore wealth,” havens are unbelievably lucrative.

Tax avoidance, in creating strains on world governments’ ability to fund basic social programs — including those meant to aid society’s most vulnerable people — has been termed a “violation of international human rights law” by the International Bar Association.

One crucial finding in the report evidences the systemic disparity in pay between men and women around the globe — in particular, the“acceptability of paying women lower wages … cited as a key factor in increasing profitability.”

Money-hungry companies avoid implementing vital fire and safety measures to eke out every possible ounce of profit. Employment of monopolies, intellectual property laws, and industry lobbyists further benefits the few at the expense of the majority.

“The current system did not come about by accident,” Oxfam’s report scolds.

“[I]t is the result of deliberate policy choices, of our leaders listening to the 1% and their supporters rather than acting in the interests of the majority. It is time to reject this broken economic model.” Even further, Oxfam asserts, “humanity can do better than this, we have the talent, the technology, and the imagination to build a much better world. We have the chance to build a more human economy, where the interests of the majority are put first.”

The question is, will we do it?

Written by Claire Bernish of theantimedia.org