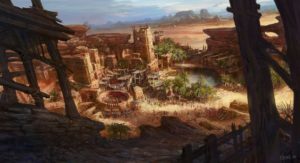 At the time of Rama and Atlantis many ancient cities are said to have existed in the Uyghur civilization of the Gobi Desert. Though the Gobi is now a parched land-licked desert, these cities were ocean ports thousands of years ago.

Advanced flying devices are said to have been in use in the Uyghur area, and perhaps the craft was an ancient Vimana coming from a still active city using Uyghur technology that exists in Northern Tibet or the Gobi Desert.

In the 1930’s the famous Russian explorer Nicholas Roerich reported seeing a flying disc over northern Tibet. Significantly, it is claimed that the Elders of Lemuria or the “Ancient Ones”, also known as the “Thirteenth School,” moved their headquarters prior to the cataclysm from the Gobi Desert to the uninhabited plateau of Central Asia that we now call Tibet.

The great Chinese Philosopher Lao Tzu, (604 B.C.), talked frequently of “Ancient Masters” and their profound wisdom. When he finally left China, near the close of his very long life, he journeyed to the west to the legendary land of Hsi Wang Mu.

According to the ancient chinese, this was the headquarters of the Ancient Ones. Hsi Wang Mu is a member of an extra-dimensional race of beings known as the Xian, who were once worshipped as gods in Ancient China.

Not much is known about the Xian, but it believed they once lived on Earth as human beings and were ancestors of the ruling families of China, Korea and Indochina. Hsi Wang Mu is also adept in tapping and manipulating mystical energies, but to an unknown extent.

She can cast spells, creating and altering spells regarding the longevity spells of the peaches of immortality. In ancient times, she was capable of creating disease and plague and conjuring illness in mortals. However the full range of Hsi Wang Mu’s mystical power is unrevealed.

Very early Tibetan legend speaks of a former glorious civilization on earth when all people had telepathic abilities. People in this age, before the so-called “Fall of Man,” were people with an amazing ability to utilize their “light bodies” at will.

Here they supposedly established a library and school known as “The Great White Brotherhood.” Regardless of local language, this highly advanced race of humans could convey their thoughts telepathically, travel in the astral, see by clairvoyance and levitate themselves or heavy objects.

One version of the Fall of Man describing people abusing these occult powers and using them for self-interest, rather than the development of humankind as a whole. The universal capacity of telepathy was lost (represented in the Bible as the Tower of Babel), and humans were thrust back into dense third-dimensional bodies.

While Tibetan Lamas never forgot these ancient human abilities, they kept to themselves in isolated development throughout the ages. It was not until the recent Chinese occupancy that these remarkable human abilities became known to the Western world, and then only gradually.

Although no one is allowed entry, it is reported that deep inside the Potala mountain there is a labyrinth of hidden caves and corridors. This subterranean system of passageways is dominated by a huge cave with several passages radiating from it, including one that ends at a sacred lake.

The lake contains several islands that were once used for initiating lamas. The lake flows into an underground river, which empties into the River Tsang-po some 40 miles (65 km) away. The subterranean chambers under the Potala are said to contain all the jewels and treasures of Tibet, along with a gigantic golden statue of the Buddha.

One of the most curious underground rooms is the Temple of Secret Wisdom, containing bodies of a giant race of people unknown to modern archaeologists.

The mountain and caves are believed to have originated before the planet’s last polar shift, a time when Tibet was a country at sea level. The plates shifted, new continents formed and Tibet rose as the Himalayas thrust the northern land skyward.

Successive monasteries were built and rebuilt upon the same mountain, that very same mountain which is a treasure-trove of secret passageways and ancient esoteric knowledge from the very early days. Could this mysterious giant race is the Ancient Ones or Hsi Wang Mu?