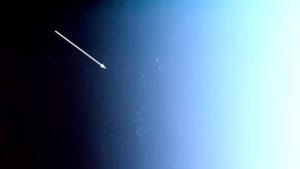 A whole fleet of mysterious objects was recorded by the cameras of the International Space Station.

Unidentified flying objects were watched by viewers of the NASA video broadcast on YouTube.

In the published video, the ISS camera captured the atmosphere of the Earth, and after a while, numerous mysterious objects appeared on its background.

Some users have decided that these are alien probes that were sent to Earth for reconnaissance purposes.

According to others, tests of secret missile weapons fell into the camera lens.

There are no comments from NASA experts regarding this video. They generally believe that most of these anomalies are ordinary optical illusions, so no further investigation is required.