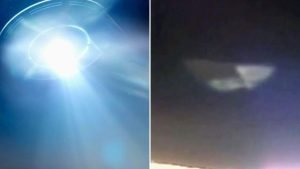 The camera of the International Space Station (ISS) recorded a triangular alien spacecraft. The event was commented on by the famous Taiwanese ufologist Scott Waring on his official website.

“While searching for footage from the NASA space station camera, I found one video that stood apart from the others. The Triangle UFO was spotted near the space station about 50 meters away. The mysterious object is huge, about 40 meters across“, Waring assures.

“Its speed matches the speed of the space station. Live cameras don’t lie. This raw footage is 100% proof that alien ships visit the space station whenever they feel like it. I doubt that they dock with the space station, but they are clearly sending a message to the astronauts on board the ISS that they exist” the ufologist writes.

The video really shows a huge triangular object, which confuses even skeptics when discussing the video. Other commentators are happy to note that clear evidence of aliens is finally emerging.

Naturally, the footage has been picked up and circulated around parts of the internet dedicated to discussing alien technology.