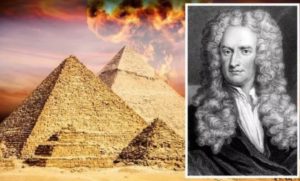 Isaac Newton is known to the world as an outstanding physicist who has formed more than one law in different areas of physical science. Few people know that the scientist tried to figure out the code of the pyramids in order to determine the date of the biblical apocalypse.

Only two centuries after Newton’s death, it became known about his hobbies for alchemy and theology. This became known after reading his manuscripts, some sections of which are full of mysteries.

Some of the found works of the scientist were presented at the Sotheby’s auction. Several sheets contain codes hidden in the Bible and the Egyptian pyramids. Newton believed that deciphering the information would reveal the exact date of the end of the world.

“He was trying to find proof for his theory of gravitation, but in addition the ancient Egyptians were thought to have held the secrets of alchemy that have since been lost,” Gabriel Heaton, Sotheby’s manuscript specialist, tells the Observer’s Harriet Sherwood. “

The sheets were partially burned (Newton’s dog could knock a candle over them), but this did not prevent them from being less mesmerizing.

Newton was interested in the cubit, a unit of measurement used by the Great Pyramid’s builders. He believed that it could enable him to figure out the exact dimensions of other ancient structures. In particular, he hoped to learn the dimensions of the Temple of Solomon, which he thought could hold the key to understanding the biblical apocalypse.

The pioneering scientist also tied his interest in the pyramid to his efforts to understand gravity. He thought that the ancient Greeks had successfully measured Earth’s circumference using a unit called the stade, which he believed was borrowed from the Egyptians. By translating the ancient measurement, Newton hoped to validate his own theory of gravity.

“The idea of science being an alternative to religion is a modern set of thoughts. Newton would not have believed that his scientific work could undermine religious belief. He was not trying to disprove Christianity – this is a man who spent a long time trying to establish the likely time period for the biblical apocalypse. That’s why he was so interested in the pyramids”, Gabriel Heaton, Sotheby’s manuscript specialist, told the Observer.

Newton’s colleagues described him as a secretive, neurotic, irritable person. He thought he was the new messiah who came to save the world, said Patricia Farah of Cambridge University, where Newton once worked. He later moved to England, on an estate in South Kesteven, to hide from criticism.