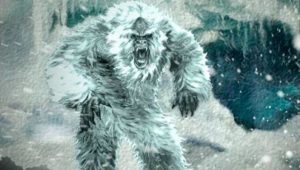 Just as Bigfoot is to North America, the Abominable Snowman is to Asia.

Tales of an ape-like creature in Asia date back to 326 B.C. when Alexander the Great learned of these stories when he invaded India. Known by different names, (depending on what part of Asia one is referring to,) the Yeti, as it’s known in Tibet, has long been thought to live high in the Himalayan mountains for centuries.

Who or What is the Abominable Snowman?

To kids, the Abominable Snowman is a misfit in the cartoon movie of Rudolph the Red Nosed Reindeer. For Disney fans, he can be found on the Matterhorn Bobsleds ride in Disneyland. For Bigfoot enthusiasts, he is seen as the Asian counterpart to Sasquatch.

To the Himalayans, this seven-to-ten-foot-tall, hairy, ape-like creature is just another indigenous animal. It is believed there are three types of Yeti. One is small, another is large, and the third is extra large. Only the large variety is believed to have any kind of association with the North American Bigfoot.

The Abominable Snowman differs from Bigfoot and Sasquatch in color and habitat, according to reports. Black and brown creatures dubbed Bigfoot and Sasquatch are primarily reported in forested areas. The Abominable Snowman, which dwells in much higher altitudes in some areas of the Himalayas in Nepal, Tibet, China, and India, is said to have white fur.

In 1951, a British explorer by the name of Eric Shipton reported that he had stumbled upon the footprint of this creature, and he photographed the print, next to an ice pick, provided for scale. The name “Abominable Snowman” was coined by Charles Howard-Bury after a trip to the Himalayas in 1921, during which he claimed to have found prints.

The Cryptid Creature Known as the Yeti

“Yeti” is a derivation from a Tibetan word used to describe the Abominable Snowman. Historically, most reports of the creature have come from the local people who inhabit high altitude communities in or near the Himalayan Mountains.

Although there are reported differences between Bigfoot, Sasquatch, the Abominable Snowman, and Yeti, all of these creatures are supposed to be large, bipedal primates that have so far been quite elusive and solitary.

Evidence of the Abominable Snowman

Himalayan hunters who claim to have seen the Yeti say it walks on all fours and swings from tree to tree, unless they come to the snow zone, where they walk on two feet to look for food in the form of lichens in saline moss.

Even though there is little evidence that the Yeti exists, it has been speculated by some scientists that these creatures could be descendants of a hominid known as Gigantopithecus.

In 1960, Sir Edmund Hillary, (the man who conquered Mount Everest in 1953,) spent ten months looking for evidence of the Yeti, only to come up empty handed.

In the 1980s, Daniel Taylor-Ide, a researcher from the renowned John Hopkins University, chalked up the sightings to be nothing more than large bears who live in the area. In 2000, Alpine mountaineer Reinhold Messner also came to the same conclusion as Taylor-Ide.

Although the evidence is lacking to support that Yeti is real, one thing to keep in mind is that creatures like Yeti have been spotted in various locations throughout the world by people from all walks of life. Science is always discovering new things and even though there is no proof that Yeti exists, one day there could be.