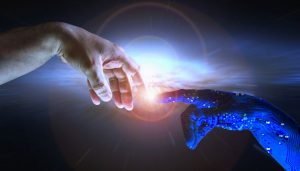 Gregg Braden in his book The God Code, makes a persuasive and compelling argument for the existence of God’s name within human genes. His discovery is evidence that man is part of a larger, cosmic whole.

Genes of Modern Man Distinct from Genes of Neanderthal Man

Traditional theory of evolution states that man evolved from his hominid ancestors over a span of 3.2 million years. The closest version of man appeared some 250,000 years ago. But there are cracks in this theory. One is that the form and brain capacity of modern man has remained unchanged for the last 200,000 years.

Another is that testing of DNA from a 30,000 year old Neanderthal infant showed that the genetic link between Neanderthal man and modern man was nonexistent.

Fossil excavations have also unearthed remains of hominid ancestors buried beside modern men, suggesting that the evolutionary leap touted by Darwin did not occur over the course of time but was probably caused by a single event. Something extraordinary must have happened 200,000 years ago that created the modern mind.

The God Code in Man’s Genes and DNA

Examining the Book of Creation– the Sepher Yetzirah–Gregg Braden has located the hidden God code within the Hebrew alphabet. Depicting the union of Heaven and Earth, this book details the basic elements that form life: fire, air, water.

Braden identifies a correlation between these elements and the chemical elements of modern science: nitrogen, oxygen, hydrogen.

Transmuting the Hebrew alphabets to their assigned numerical values produces the same numbers used by modern scientists to define the simple mass value of chemical elements.

By converting both ancient and modern elements and the Hebrew alphabet to their numerical values, Braden is able to show that these ancient alchemical elements are the modern components of DNA and that the basic code of human DNA carries the Hebrew letters YHVG (Yahweh).

The name of God is literally encoded in human DNA structure, a situation Braden describes as a 1 in 234, 256 chance with a probability of .00042 percent (112), the probability of the miraculous.

Man Is Encoded with the Tool for Change

Historian Eric Hobsbawm claims that the 20th century was the “most murderous century” in recorded human history (218). Change is necessary if man is to redeem himself from the brink of total annihilation.

The God code inscribed in human genes and DNA is testimony of man’s unity with the cosmos and his possession of the tool for change and salvation.

If man, argues Braden, can move towards this powerful experience of unity, he will bring about the necessary changes in behavior and thought. God’s signature in man’s genes is a reason to believe that change will occur.

Astronomer Frank Drake’s estimation that there could be as many as 10,000 intelligent civilizations formed within the 13 to 14 billion year history of the universe suggests that man is not alone.

Gregg Braden states emphatically that the God code within man’s DNA is not from this world even though it is firmly grounded in this world.

But this encoding provides an apt explanation for man’s dramatic evolutionary leap 200,000 years ago. The encoding probably came from more advanced civilizations which had undergone the same experiences man is going through now.

These civilizations survived because they had learned the lesson of love and unity. Before his death, Carl Sagan stated emphatically that the future of human civilization depended on man’s reception of messages from interstellar space.

If spirituality is encoded in man’s genes, the possibility of a New Earth arising from current chaos rests in his hands.

7 Signs Proving That An Angel Is With You