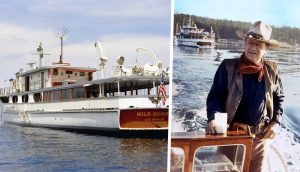 John Wayne often portrayed bigger than life men who were quintessential heroes in clichéd white hats. He was esteemed by fans and peers.

Duke, as friends called him, loved the sea and bought the yacht in 1964. The Wild Goose was a converted mine sweeper from the era of World War II with luxurious staterooms and required a six man crew. About a month before he died, Wayne sold the vessel to Lynn Hutchins, a lawyer. Nearly four months after, phenomena started.

Hutchins felt Wayne’s presence many times. The first encounter with the apparition was when he walked from the master bath to his stateroom. He saw a tall figure wearing a cowboy hat standing in the doorway.

Hutchins could not see the face clearly because of the hat. The apparition was shaded in grey and appeared solid. As the lawyer walked toward the figure, it vanished.

The second time he saw the ghost, he was in the bar that has mirrored walls. Hutchins sat at the poker table when he saw the apparition, again, shaded in grey, reflected in the mirror standing behind him. When he began to speak, the specter disappeared.

One night, he was sleeping in the Duke’s former stateroom and suddenly awoke. The room was dark. The boat was eerily quiet. The lawyer noticed someone standing by the door and he froze because he was alone on the yacht.

The figure disappeared when he jumped out of bed. Later, he talked to the boat’s former captain and was told he saw John Wayne.

Another time, Hutchins was reading in the salon and felt someone standing behind him. As he turned, there was a gust of air, then he heard Wayne’s beer glasses clank so hard he thought they would break.

The startled man looked into the mirror and saw a second reflection. He recognized Wayne’s face. He looked around and no one was there. When he looked at the mirror, the reflection was gone.

There was a strange incident with brass hurricane lamps that Hutchins bought at a shop which sold used nautical items. He hung them in the galley.

When the boat’s engineer saw them, he remarked that Wayne told him to take the lamps down because he would hit his head on them. The engineer said he stored them below deck. When the pair checked the stored lamps, they were exactly the same as the unusual ones Hutchins bought.

In addition to the sightings, Hutchins often heard footsteps walking up and down the deck. When he looked out, no one was there. One night, a caterer stayed aboard and also heard the treading of feet. Hutchins later found out Wayne had a habit of walking the deck at night.

Roll discovered both Wayne and Hutchins were attached to the boat. The lawyer kept the yacht in a way as a museum to Wayne’s memory would be kept. The actor’s plaques hung on the walls.

His books remained on the shelves. The Wild Goose was still John Wayne’s boat. The parapsychologist tested Hutchins psychologically and found he was not prone to fantasy.

Hayes felt Wayne’s presence and believed he still visited the boat. Hutchins also believes Wayne is there and says he feels warm and protected when he is on the yacht.

Wayne believed in life after death and, perhaps he is proving it by visiting the yacht that he loved….