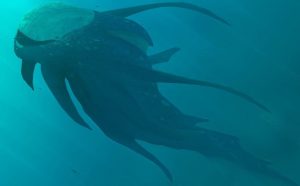 The Lough Ree Monster has been sighted and investigated. This cryptid and others have made Ireland their home, as well as the Cait Sith of legend.

Lough Ree, also called Loch Ribh, is about 15.5 miles long and 4.35 miles wide and has a bed of carboniferous limestone. It’s the second largest lake in the River Shannon System and serves as a recreational area for boating, hunting and fishing.

There’s a small commercial eel fishery that has local fame for its Eels on Wheels business. It’s also known as the home of the Lough Ree Monster, a lake cryptid that has been sighted for centuries.

May 18, 1960: Father Richard Quigly, Father Matthew Burke and Father Daniel Murray were fishing on the shores of the lake in County Meath, when one saw an unusual object about 100 yards away.

The creature was 6 feet long from head to coil and the head and neck were approximately 18 inches long. It swam steadily and there was no apparent disturbance of the water. The part of the body above the water didn’t undulate.

It swam towards the shore, then submerged gradually, disappeared and reappeared. When it was about 30 yards from the shore, it submerged again and didn’t reappear.

The testimony of these three clergymen gave credibility to the existence of the cryptid. Local newspapers published the story. The BBC, internationally, reported the sighting and published it in numerous languages.

When skeptics tried to debunk the sighting, primarily, by saying it was a case of misidentification, some of the locals came forward with their sightings and encounters.

Encounters with the Ree Cryptid

Two men, who were walking by the shore of St. Mark’s Bay one evening, saw what looked like a calf swimming in the water. They rushed to try to rescue it. It submerged in an area charted to be 70 feet deep. Later, the placed was dragged. Nothing was found.

Retired postman Paddy Hanley said that, 30 years before the priests’ encounter, he was fishing north of Yew Point at the mouth of Bally Bay when something strong grabbed his line. He was dragged around the lake until he was able to cut the line. Two similar experiences were reported by F.J. Walters and two English tourists.

Local fishermen Patrick Ganley and Joseph Ouigly, 2 months before the priests’ sighting, fought with a huge unidentified critter that got into their pike net. They couldn’t see the creatures’ size because it splashed columns of water about 6 feet high up into the air. The duo said that whatever they encountered was as strong as a horse and after it escaped, there was a 9 foot hole in their net.

The amount of credible encounters with the Lough Ree Monster prompter a three man team from GUST, the Global Underwater Search Team, including founder Jan Sundberg, to make a 5 day expedition to Lough Ree in June, 2001.

Sandberg heard an anomalous sound when he used a hydrophone. He said the sound was very similar to those he heard while leading expeditions in Norway. Sundberg and others saw a small, dark tube like object swimming away from an island that appeared to swim by something unseen manner beneath the water.

So far, there have been sightings, sounds and encounters with the cryptid, but there is no live captive or corpse; therefore, no hard scientific proof it exists.