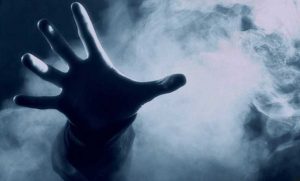 The village of Centrahoma, Oklahoma, nicknamed Little Dixie due to its strong Confederate sympathies, consists of a few trailers, small cottages and a small post office and has a population of 150 people.

Beginning on June 15, 1990, it had a strange visitor who lingered for four years. The McWethy family was the unwilling host for the poltergeist whose antics included throwing objects.

The McWethy family, Bill, Maxine, daughter Twyla and her baby Desirée were sitting in the front yard when a stone hit the side of their house. Two more stones followed. Bill yelled, telling for the prankster to stop throwing rocks.

Stones kept bombarding the yard and house, once every several minutes. Some were the size of a thumbnail; others, of a golf ball. The attack continued for twenty-four hours and broke some windows. Bill asked his neighbors to help investigate. They found no source for the activity.

The following night, as the McWethy family was relaxing, the stone-throwing started again. The attacks continued, on and off, through June and into July. No culprit was found. Finally, people thought the prankster might be a ghost.

In July, about fifty people met at the McWethy’s house to investigate the situation. They put nail polish on some stones and threw them out of the yard in different directions. The marked stones were tossed back. They threw these stones into a pond. Wet stones sailed back toward the shore.

In August, the family contacted the Coal County Sheriff. Deputy Bill Ward Jr. responded. Before he could get out of his car, a barrage of stones hit it. He was able exit his car and search for the culprit, but found none. After he returned to his office, family called the sheriff, requesting that he come to the house. He refused.

On another day, Maxine and Twyla were sitting in the front yard when they were pelted by various coins. Several days later, Maxine and a friend of hers went into the tool shed and were hit by tossed screws, nails and other metal objects. They ran outside, then heard tapping on a manual typewriter.

In November, the poltergeist moved indoors and tossed rocks, coins, eggs, bottles and other items which seemed to materialize in mid-flight. Covers were stripped from beds and draped over chairs. The poltergeist splattered the family’s parakeets with food coloring. Twyla and Maxine heard a high-pitched “pssst” sound that transformed into a voice.

When reporter Helen Langdon asked if this was of God., the stone throwing focused on her. The group moved into the living room. The poltergeist followed. Twyla, again, was the focus of the activity.

The poltergeist drew symbols on mirrors, one of which signified Saturn. People heard a high pitched feline mewling sound that roamed around the house.

Centrahoma Poltergeist and the Bell Witch

Maxine’s first husband’s surname was Bell; Twyla, his daughter. Years before the Centrahoma Poltergeist struck, John Bell and his family were plagued by a poltergeist who called herself Kate. John was the target of her antics.

On December 19, 1820, John was in a stupor. The family found a strange vial with dark toxic liquid in the medicine chest. He died the next day. Some of Bell’s contemporaries suspected Betsy responsible for the “haunting” because she hated her father and that it was she, not Kate, who killed John.

Both cases have parallels. Poltergeist activity was involved. The entity spoke and revealed its name. Could Twyla be John Bell’s descendent?

It appears that Twyla was a human agent poltergeist, HAP, because the activity centered around her. Poltergeist activity is a manifestation of psychokinesis, PK, the ability of the mind to affect matter.

The HAP has a psychological profile that includes experiencing unpleasant emotions such as frustration, anger and feeling unworthy and tests high for PK ability.

The emotions are suppressed, causing PK to be released from the subconscious mind. Unfortunately, a parapsychologist didn’t investigate the case, so there’s no profile for Twyla or test results for PK.

HAP activity can stop spontaneously, which it did in this case. Is Twyla a descendent of John Bell? This could be proved by genealogical records, if they exist.