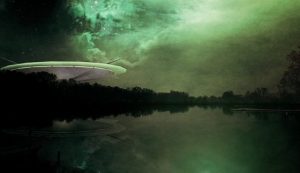 Emily Eppig: How were you involved with UFO investigation in the military?

Alessi: A private pilot by the name of Kenneth Arnold in 1947, flying along a mountain range in the western US… spotted these objects that were maneuvering around the sky. They were not aircraft. He said they looked like a saucer placed on top of a saucer.

Some gentleman in the news media gave it the name flying saucer… Well, the Air Force looked into this, since… our air space was being violated by whatever these objects were or are. They started Project Sign.

The investigating personnel of Project Sign came to the conclusion that the objects were real solid objects under apparently intelligent control, equal to or superior to our own knowledge. The chief of staff of the Air Force said ‘hogwash, I don’t want to hear that’ and disbanded Project Sign. They reformed it as Project Grudge – also to delve into the nature and extent of UFOs… They came up inconclusive.

Then they formed Project Blue Book, which was under the command of a captain at Wright Patterson Air Force Base in Ohio. I believe he was in the Air Material Command. Project Blue Book was tasked with finding out what flying saucers or what this phenomenon was all about. Each base would have officers assigned to assist Blue Book when they got report of a sighting in a specific area and it went directly to Blue Book. Blue Book would farm it out to the Provost Marshall at the various bases or in some cases the Office of Special Investigations.

I was a sergeant in the Provost Marshall’s office, working directly for the Provost Marshall and IG of the Special Weapons Command. I worked equally for both of them. Whenever there was an investigation, regarding UFOs – objects seen in flight that were unidentified – we would go out and question witnesses and get information from them, photographs if they had them, motion pictures that were taken.

Eppig: Can you describe one sighting and the ensuing investigation?

Alessi: One sighting was over Los Alamos, the Atomic City, where you have some of the top brains in the country. This was in the early 50s. There were 3,000 people on the ground, physicists, all types of very smart people observing these objects and as a result of this the long-range radar from Kirtland lit up.

The mountain sights around the area turned their radars on and they got ground to air contacts on almost all of the radars.

The two that were up happened to be at the southern leg of their patrol area. They were vectored into Los Alamos. The two ready-jets took off and they proceeded up there. Inbound from Lowry Field in Colorado were two F-94C day-night fighters.

They were one of the first fighters that had a radar observer in the back seat with the weapons officer. As I recall, they had loaded weapons on board because they were, after stopping at Kirtland Field, procedding to Nellis to the gunnery ranger. Anywhow, they were contacted to check on these objects. When they got there, they had air to air radar sighting of these.

Eppig: What happened after they made air to air contact?

There was radar operating in the aircraft that picked up the objects and then as they got closer, they actually had eye ot air, personal visual contact of these vehicles, whatever they were. Every time they would close on these six objects, these objects would break the radar lock as well as the eye lock and zoom off at crazy speeds doing virtually square turns.

You’ve got these four guys in the air, you got the radar sights, ground to air, you’ve got the two F-86’s that arrived and every time they would close on these objects, they’d just take off and come back like they were playing tag with us. Six pairs of eyeballs to object with direct sight. They were unable, as fast as these aircraft were… to overtake these objects.

Eppig: How did the interviews unfold regarding that UFO sighting?

Alessi: The Air Force official version after all the reports were in – whoever made this great decision – came back and said it was a weather inversion. Frankly, based on the quality of the persons interviewed, I don’t believe that for one minute.

Eppig: What’s your personal take on the existence of UFOs?

Alessi: I know of instances where photographs were turned over to investigators and they would deny ever haing received them. There is a long history associated with UFOs and making the people that report them sound crazy and so forth, trying to discredit them.

I think the US government and the former Soviet government, now the Russian government, know about them [UFOs]. My feeling is that yes, they are solid objects under intelligent control and I don’t know who they belong to or where they come from.