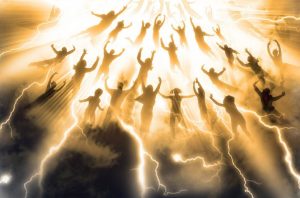 There is a fairly predictable process the mind goes through as the body dies. Knowing this can help family caregivers and their loved ones cope in the final days of life.

Scientific studies of near death experiences give a glimpse of what happens inside the minds of the dying.

The Near Death Experience

Researchers estimate that one in three people who recover from a brush with clinical death and then return to life report having had a near death experience (NDE), according to Nora Underwood in her article “Between Life and Death” published in the April 20, 1992 issue of Maclean’s.

This involves being outside one’s body, watching doctors and nurses working on oneself, passing through a tunnel toward a light, gaining knowledge and a feeling of love, being with deceased friends and family, and ultimately returning to the body.

The Unconscious Patient May be Experiencing Consciousness

While the NDE may not be proof of life after death, NDE research teaches that even when people seem completely unconscious and unaware, there can be an awareness and a consciousness happening.

It is well documented by Melvin Morse, M.D. and others that clinically “dead” patients accurately report exactly what was going on in the room (and even in other rooms) before they were brought back to life.

The Near Death Experience is Comforting to Most

For example, they no longer fear death, they are less fearful in the way they live their lives, and they feel more love and good will toward others.

Conversely, patients who brushed death and did not have NDE’s seem to fear death more and live more cautiously, research shows. Some people have negative or frightening experiences when they clinically die and then return, but they seem to be in the minority.

Some in the medical community have been trained to treat such visions as hallucinations or dementia, and medicate the patients with anti-anxiety medications to produce amnesia and calm any distress caused by the visions.

Many people are, in fact, frightened by the visions, usually because they think they are going crazy. Apparently, once people learn that such visions are normal they feel great relief.

Some are disturbed by their visions because they are not yet ready to die. There may be unfinished business, unresolved issues, or fear. It can be helpful to reassure these patients that it is OK for them to let go.

Caregivers can listen to what the patient is saying about his or her own death, and allow the patient to express any fears or say goodbye.

Caregivers can also say whatever they feel has been left unsaid at this time. It will help during the grieving process if people have said what they wanted to say to each other while they were still alive.

If dying patients are willing to talk about their death, it is not helpful to deny that they are at death’s door or to pretend that they will get better.

Pre-Death Visions Can be Reassuring

Many are actually calmed and reassured by their pre-death visions, and want to remember them. The visions often help people willingly and peacefully embrace their own death.

Enlisting the help of hospice services during this time can be very helpful. Hospice workers can talk to family members and patients about these issues in a knowledgeable and reassuring way.

Most people who have clinically died and returned are no longer afraid of death. Facing the inevitable death of a sick loved one and helping her through it, instead of pretending it is not happening, can be a wonderfully healing time of connection between caregivers and their loved ones.