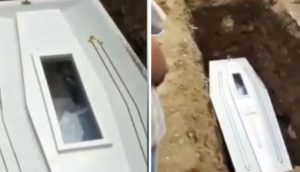 On May 5, 2020, a standard Christian funeral ceremony was held at the Manado Cemetery in North Sulawesi, Indonesia, except that a narrow window was made in the coffin, in which one could see the clothes of the deceased

When the coffin was lowered into a dug grave, the priest began to read prayers, standing next to the family of the deceased. He read, “God said in the book of John. I am the Resurrection and the Life. Whoever believes in me, he will live, even if he is dead.”

At this very moment, the author of the video was filming the coffin lid and something was moving there. As if the deceased waved his hand, trying to touch the window.

The author of the video did not immediately notice this. Only later when he saw this movement in the coffin, he posted the video on the social network and it immediately became viral.

People wrote that maybe a person was still alive when he was buried or something mystical happened.

Some put forward the version that it could be a natural movement of the corpse, which happens to the dead during the decomposition of the body. Gases accumulate in the body, the destruction of muscle tissue occurs, and therefore the body can change position.

However, what is shown in this video is more like something intentional, rather than random hand movement due to decomposition.

Unfortunately, the name of the buried person is not yet known, as well as the circumstances under which he died and whether a posthumous autopsy was performed before the funeral.

Man Without Pulse, Wakes Up With Incredible Vision of Afterlife