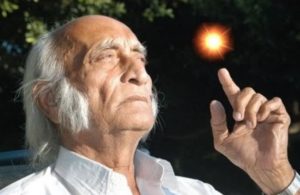 Hira Ratan Manek claims that since 1995 he has lived many days solely on sunlight and water. Sun gazing is the practice of staring directly at the sun to receive “nourishment” from it.

“Sun gazing is a relaxed look at the sun just as we see sunrise and sunset,” Manek said. “It gives all benefits for health. Those who practice sun gazing get total health of mind, body and spirit without any cost … but only at safe times of the sun.”

Sun gazing is often practiced with the bare feet in direct contact with bare earth. Some sun gazers only sun gaze during the so-called safe hours, one half hour after sunrise and one half hour before sunset, while others feel that sun gazing can be done at other times of the day.

Manek, 69, from Bodhavad, India, has studied sun gazing for several years and claims that since June 1995 he has lived only on sun energy and water. Occasionally for hospitality and social purposes he drinks tea, coffee and buttermilk.

According to Manek and other proponents, sun gazing was practiced by a number of cultures including the ancient Egyptians, Aztecs, Mayans and Native American tribes as well as practitioners of Indian and Tibetan Yoga.

When asked how depriving the body of food would lead to adverse effects, Manek said the human body requires energy and that the sun is capable of providing the body with all the energy it needs to function.

“What we traditionally eat is nothing but a secondary source of sun energy,” he said. “But the body has a mechanism to receive energy directly from the sun and store it to use as it requires.”
Some positive results reported by sun gazers are increased energy level and decreased appetite.