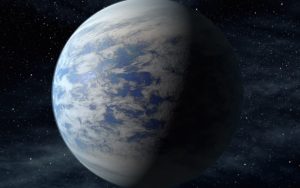 Researchers at the University of Canterbury (UC) have detected an incredibly rare new super-earth planet in the center of the galaxy, and that it is one of only a handful that has been found with a size and orbit comparable to that of planet Earth.

According to research published in The Astronomical Journal, Dr. Herrera Martin, the leading author of the paper, described the discovery of the planet as unbelievably rare.

“To have an idea of the rarity of the detection, the time it took to observe the magnification due to the host star was approximately five days, while the planet was detected only during a small five-hour distortion. After confirming this was indeed caused by another ‘body’ different from the star, and not an instrumental error, we proceeded to obtain the characteristics of the star-planet system,” Dr Martin said in a statement.

Using the solar system as a reference point, the host star is around 10% the mass of our Sun, and the planet would have a mass somewhere between Earth and Neptune, orbiting from the parent star at a location between Venus and Mars.

Because the host star had a smaller mass than our Sun, the planet would have a ‘year’ of about 617 days, the researchers noted.

Are there aliens out there? According to independent astronomers, the probability is quite large.

Scientists say Earth has entered a new cycle of extinction