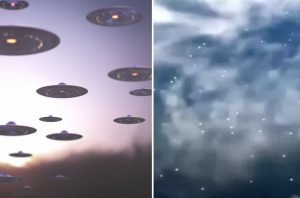 The incredible and breathtaking footage you’ll see in the next video is of a fleet of mysterious light spheres captured over the Bay of Bengal, India.

The video was posted on Youtube at the end of February 2021. However, the man has kept it to himself since it happened in 2017.

The witness said he did not publish it until he saw other similar videos. The person filming the UFO fleet was on board a plane flying from Bangkok to New Delhi on August 10, 2017.

Researcher and ufologist Scott Waring analyzed the footage. And said:

“I carefully analyzed the video showing a fleet of spheres of light and saw that when zoomed in, some of the luminous spheres passed behind the clouds and disappeared for a few seconds. This is 100% proof that the objects are outside the window and are not reflections inside the plane.

“Many years ago I saw another video of a similar event, but this video is more descriptive. It is very rare for an alien fleet to rise above the clouds. There must be a hundred or more. 100% proof of the existence of aliens on Earth”