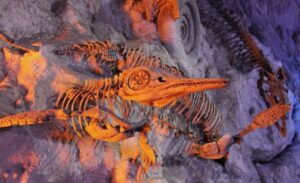 British paleontologists have been exploring the coastal zone. They accidentally found a huge number of fossils that belong to the Jurassic period. The study showed that these creatures died all together due to some kind of terrible catastrophe. This find was named “Pompeii”, reports BBC News.

The discovered fossils are about 167 million years old. In those days, there was a sea in this place in Britain, the depth of which did not exceed 40 meters.

Then the climate was warm enough due to the fact that the British Isles were located on the site of the territory of modern North Africa.

While studying British fossils, experts found that they belong to starfish and cucumbers, lilies and hedgehogs. Some of them swam in sea water without any problems, others existed on special stems, and others crawled along the bottom of the reservoir.

In total, experts have recorded several tens of thousands of creatures. Paleontologists emphasized that this find was the largest, because such a number of fossils had not been simultaneously recorded by experts in Britain at the same time.

Previously, they were able to find only a few samples that belonged to the times of the Jurassic period.

Thanks to such a discovery, specialists received a huge amount of interesting material with the help of which they can carry out effective research in the future.

The fossils are in excellent condition. Experts believe that an earthquake could have happened in this area, which triggered a landslide of incredible strength. It caused the death of beings and at the same time ensured the safety of their bodies.