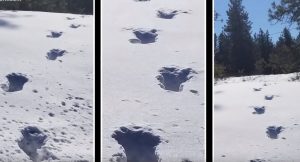 A Medical Lake man believes he’s photographed the legendary Sasquatch’s set of footprints. Retiree Steve Meacham and his wife were driving through their neighborhood in search of nature scenes to photograph when they saw something extremely unusual in the snow-a set of large footprints, each measuring about 23 inches across with a 35-inch step.

The couple tried to follow the trail, but the snow was too deep, so they came back.

“I have no idea what could [have] made these, other than Bigfoot!” Meacham wrote on Facebook.

But could this prove a mysterious bipedal hominid, or is there a simpler explanation? According to the Fish and Wildlife Department of Washington, the footprints may be the result of’ postholing’-which is when a snowshoe-free hiker sinks into the snow on each step. However, Meacham remains unconvinced and is convinced that there is Bigfoot out there.

“I’ll be a believer until they prove he’s not and I don’t think that’s ever going to happen,” he said.

You can see a news video showing pictures of the tracks below.