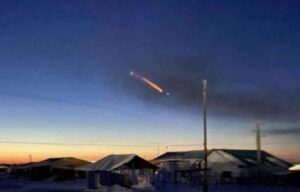 On March 12, in the sky over Yakutia, local residents watched as an unidentified space object entered the dense layers of the earth’s atmosphere, engulfed in flames.

The main thing to pay attention to is that the object does not fall, it lands. Accordingly, someone must control this space object in order to set the trajectory and flight speed for the regular passage of dense layers of the atmosphere.

Georgy Goncharov, a leading researcher at the Pulkovo Astronomical Observatory of the Russian Academy of Sciences, said that he did not agree with the conclusions about the “garbage” origin of the fireball and in his opinion it was most likely a meteorite.

But it is enough just to watch the video filmed by eyewitnesses to see that the object at low speed enters the earth’s atmosphere along a gentle trajectory.

It does not fall apart and does not explode, it simply passes through dense layers leaving a trail of fire behind it, but the object itself is unharmed.

Translucent ghostly creature crossing the road was filmed in the park