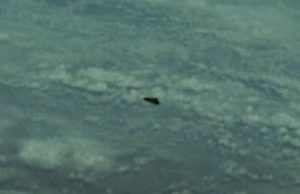 A photograph taken by astronauts of the Apollo 9 mission of the US National Aerospace Agency (NASA) showed something strange. Researcher found a black triangular “alien ship” in the picture.

A picture taken in the late 1960s by astronauts on the American manned mission Apollo 9 suddenly got a second life when modern researchers discovered something inexplicable on it.

We are talking about a dark triangular object that the astronauts accidentally captured above the Earth.

“If you zoom in on the image sufficiently, you can pay attention to a strange triangular object. What is it? Obviously, the origin of this structure cannot be natural. Before us is some kind of aircraft that is above the Earth. An alien ship?” asks ufologists.

Experts noted that this is one of the first cases when astronauts managed to capture something mysterious from space.

Remains of ‘Baby Nessie’ washed up on British coast