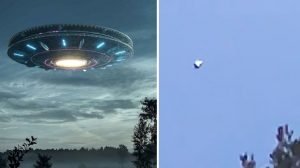 On August 23, 2021, while participating in a bicycle race, an eyewitness accidentally noticed a UFO in the sky.

Realizing in time, the man took out his smartphone and began to shoot a strange object with a very unusual shape.

Ufologists believe that initially the object moved between the trees, it is easy to determine by watching the video in slow motion.

This video was taken in the San Luis Valley in Saguache County Colorado.

Some commentators mistook the mysterious object for a mylar balloon. But ufologists disagree with this conclusion. According to them, this place is too remote for an accidentally flying balloon.

“The way it doesn’t turn on itself, doesn’t touch the branches is indeed definitely unusual for an alleged randomly floating object”, writes
Hector Pardo.

“I think that the reaction of the witness who seems nervous is important, you don’t feel like this just because of a mylar balloon. At least one would expect that he finds out and calms down anytime during the video but the more he observes it, the more the witness feels uncomfortable,”, he continues.

“Seen a lot of strange in this area before. Sand Dunes, Crestone. Taos. Questa. Met a lot of folks who experienced animal mutilations in this area. Lived there 5 years,” writes another commentator.