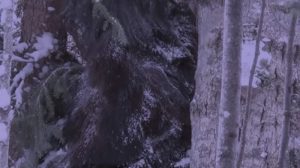 According to the description, the video was shot by a local resident David Beaver, who hunted moose in these forests. A more accurate location is the North Saskatchewan River Valley.

A resident of Canada walked through a snowy forest, suddenly his eyes fell on a completely gnawed skeleton that hung on a tree. Near the remains, something huge and hairy was spotted. The hunter immediately thought about the yeti, since the creature was not like any other animal.

The video is very clear and you can see the smooth coat of a bigfoot, like a gorilla, as well as the fact that the yeti stood upright. The creature hardly moved, only occasionally moved his head.

Beaver believes that there was a smaller Bigfoot on the back of the big yeti. If so, then the man could capture the mother and the cub.

The hunter soon began to retreat, as he was too close to a dangerous animal.