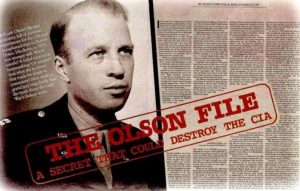 A French village had an enormous outbreak of mass insanity in its community in the 1950s. People started to hallucinate and act insane. It has been said for many years that the bread is contaminated with poison or mold. Recently, it was found that the CIA contaminated the food of the village with LSD. H.P Albarelli Jr. discovered it.

He wrote a book on the findings. Albarelli thought it was the way the CIA controlled the people’s minds. The people always thought the bread they had eaten was a curse.

After taking the drugs, the villagers began to have strange visions; some were even put in asylums. One of the residents felt as if he were getting smaller and smaller as the days passed. The days worsened by the second.

One person tried to drown because he thought he was eaten by snakes, a child tried to kill his grandmother, and another thought he was in a plane but was on a building; he jumped off and broke both legs. The official story was that the local baker infected the bread with an ergot mould. And that this caused the hallucinations.

However, H.P Albarelli Jr. has great doubts about the official story. It is clear to him that the CIA must have applied LSD to the villagers within the scope of secret experiments.

His findings are based on a CIA document entitled “Re: Pont-Saint-Esprit and F. Olson Files. So Span/France Operation file, inclusion Olson. Intel files. Hand carries to Belin-tell him to see to it that these are buried.”

According to the BBC, Olson was Frank Olson or a CIA scientist who led the research for the LSD agency.

Finally, the CIA has no evidence of anything to do with the hallucinations or of the involvement of the French authorities.