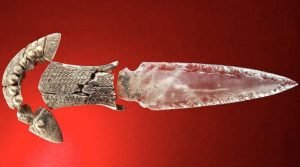 Archaeologists have discovered an ancient dagger made of rock crystal in one of the tombs in Seville, Spain. Experts believe that the age of the artifact is 5000 years ago; it could have been an amulet for a wealthy person.

The dagger is 20 cm long, and its sheath and handle are made of ivory. The researchers note that traditionally such weapons were made of stone. For this reason artifact found by scientists should be considered very valuable.

Rock crystal symbolized vitality for ancient people, as well as a connection with ancestors. However, it is unclear what the crystal dagger was made for, as it is quite fragile.

The weapon was found in the course of work related to the excavation of the Seville necropolis. In addition to the dagger, 10 arrowheads and four small blades were found in the tomb, all items made of rock crystal.

There have never been any deposits of this mineral in Spain. Scientists concluded that this material was brought to Seville from afar. Rock crystal was a special commodity, its value equated to gold.

Researchers believe that the owner of this dagger could have been a wealthy man who ordered a blade made of rock crystal. The weapon could emphasize the special status of its owner.

According to another version, the dagger could be used for ritual purposes in order to observe burial traditions. In ancient times, it was believed that crystal accumulates strength and brings victory. For this reason, crystal amulets have become widespread, contributing to luck, success and victories.

“This is a magical material that concentrated energy. It was believed that it gathered strength and brought victory, that is, the use of not only crystal weapons, but some crystal amulets should have contributed to success, luck, victory, ” said Sergei Zasorin.

The transparent mineral has been endowed with magical properties by all peoples at all times. French knights tied pieces of mineral to a sword, believing that this would increase the power of his blow. And in Tibet, they believed that wounded soldiers could be healed with crystal.