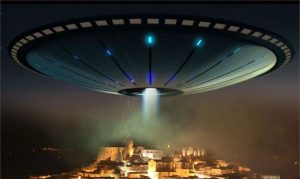 Most often, we become witnesses of small unidentified aircraft, the size of which is not more than a point. There are a large number of such videos on the Internet.

However, this case is completely different. Ufologists are very interested in footage filmed by South Korean residents. On the video they captured a huge luminous object.

Two men living in Daegu walked through the parking lot when they spotted a mysterious glowing object in the sky. According to them, the UFO was simply huge, and the video shot was not able to fully convey its scale.

Witnesses of the anomalous phenomenon were very frightened by an object hanging in the sky, which was not even going to hide from the eyes of others, as is usual in such cases. The object seemed to intentionally attract attention.

It is possible, according to ufologists, that the UFO intended to make contact with the inhabitants of the city, but something stopped him. Others think that the object intentionally scared people to feed on their energy.