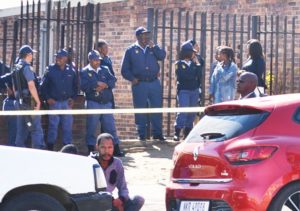 An ordinary-looking local resident came to the police station in Estkort, South Africa, and immediately declared: “I am tired of eating human flesh.”

At first, the police thought that this man had smoked something, but in the bag with him he really had parts of a dismembered human body: arms and legs.

Later it turned out that this man was part of the cannibal community, and in their village almost a third of the inhabitants consciously tried human flesh.

As the local newspaper Estcourt News reported, when the police searched this man’s house, they found eight human ears in a pot. The remains smelled terribly and have already begun to decompose. And this meant that at least a few people became victims of cannibals.

Then this same man took the police to another house where acts of cannibalism took place.

“The human remains were found in the same building in Estkort and in another house in Amangwa. So far, among the victims there is one person officially listed and his identity has not yet been established,” said police spokesman Sharmain Struvig.

Later, the police arrested four cannibals, and then three more, among whom was one healer.

It turned out that they could not only kill people themselves, but also dug up remains from cemeteries.

A member of the local council, Mtembeni Majola, gathered locals in the town hall in order to calm them down. Instead, he was shocked to learn that about 300 people from the crowd, that is, every third person, admitted that at least once in their life they had tried human flesh and did it consciously.

After that, most of them pointed to local healer Nino Mbata, who was the leader of cannibals and asked people to dig graves and eat human flesh in order to “heal”.

“He told them that digging up the corpses would make them stronger and protect them from harm, and the bones would bring them wealth in the future.”

After the arrest, the cannibals said that the arms and legs belonged to the woman they had killed and dismembered. Her identity was identified as Zanele Hlatshwayo.