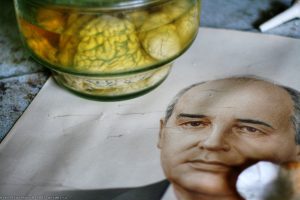 Dating back as far as we have scientific endeavors, mankind has sought after the greatest ideal of perpetual life. In the renaissance, we contemplated through alchemy how one’s life might be extended forever, but even before that, religion and myth spoke of Holy Grails and Fountains of Youth.

Today our goals have not changed but the methods have become significantly more impressive through pharmaceuticals, nanotechnology, and even quantum immortality. However, between these eras the quest for immortality took a turn for the gruesome and utterly creepy. Introducing cognitive transplantation…

The concept is simple and wouldn’t on its own be creepy – the brain is the seat of consciousness and cognitive ability, and so when the body dies, simply give the brain another one. The problem is that the pioneers brilliant enough and reckless enough to attempt such a thing were also a bit mad, as was the case with Vladimir Demikhov, a Soviet scientist and organ transplant pioneer in the mid-20th century.

Vladimir’s work began with a number of organ transplants in animals that were for their time an astonishing breakthrough, including the transplantation of a heart into an animal and the replacement of a lung. Then he began on what was his most impressive and horrific achievement: the transplantation of whole heads. First he successfully swapped the heads of two dogs, but why stop there? His next feat was to create a living two headed dog.

Although Vladimir Demikhov died in obscurity in 1998 his gruesome experiments were the inspiration for Robert Joseph White, an American neurosurgeon who successfully performed similar experiments with the heads of monkeys.

In all cases where the heads of animals were removed and then reattached to another body the animals are able to smell, taste, hear, and see the world around it, but are left completely paralysed as this level of repair to the spinal column even at modern standards is beyond us.

Most sources will clearly state “no human is known to have undergone the procedure”, but can we really believe that is accurate when the states involved were those of Communist China and the Cold War era Soviets?

The Moscow Brain Institute and the Secret Russian Brain Lab

Russia has a long history of experimentation / generally creepy behaviour with brains, much of it documented. In 1927 Russian neurologist, Vladimir Bekhterev conceived of what he called a Pantheon of Brains.

This sounds like something from an episode of Futurama, but the general concept was to develop a science known as cerebral cytoarchitecture to such a point where brains could be kept alive indefinitely. This was not just an ideal for Bekhterev, in fact he was granted permission, funding, and opened one of Russia’s more secretive agencies, the Moscow Brain Institute.

Although there is no formal knowledge of a collection of living brains inside, the Moscow Brain Institute still exists today and houses the brains of Russian poet Vladimir Mayakovsky, and Vladimir Lenin. Names of previous owners of brains housed at the institute are a tightly kept secret, but the People’s Commissar of Public Health Nikolai Semashko wrote that the collection included “six Russian brains, two Tatar, Chuvash, Armenian, Georgian, Jewish and Turkish.”

In more recent years a few more grisly discoveries of Russia’s experimentation with human brains have been uncovered. A group of urban explorers discovered an abandoned and sealed science lab once belonging to the Russian Army.

Inside the lab they found brains stored in jars, brain sliced into slides, and files upon files of documents outlining the creepiest of research. However, their discovery is considered along the lines of urban myth and has gained the title of “secret Russian brain lab” on the internet. The pictures do make for a good debate though, and if they are real what were these cold war scientists working at that couldn’t be formally conducted at the Moscow Brain Institute?

Heads aren’t the only thing we’ve taken off and put back on, the pinnacle of cognitive transplantation and to a large degree still considered only conceptual is full or partial brain transplantation.

In the cold war spy arena imagine the benefit to swapping out a person’s brain for the brain of your choosing effectively replacing anybody with your own agent. Of course it is complete speculation, but it seems unreasonable to believe that there has never been an attempted head or brain transplant on a living human being. Somewhere in the world at some time in the past eighty years somebody woke up with somebody else’s body, paralyzed and unable to communicate.

The Urban Legend of Carmen Winstead