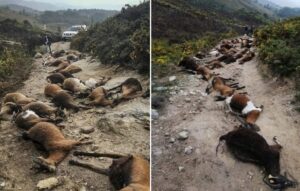 A nearby shepherd was talking on his cell phone when he suddenly heard two extremely loud thunders, although there were no clouds or rain.

After the unexpected thunder, the farmer looked towards his 300 goats grazing just 100 meters away. He noticed that some of his animals were walking abnormally and decided to check if everything was in order.

It was then that he was horrified to find 68 dead goats lying in a row. Shepherd Dario Lima has never seen anything like it in his 40 years of experience. He says his animals “exploded from the inside.”

He also said that a fire broke out among the vegetation 500 meters from this place.

Meteorologists also confirmed the fact that there were no thunderstorms in the area. What phenomenon killed so many animals remains a mystery.