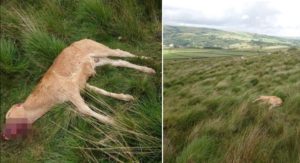 In Yorkshire, England, a strange event, usually associated with the United States, occurred – a mysterious cattle mutilation. A small calf was injured. For a picturesque British rural region, this incident was shocking, no one else had seen anything like it, reports UK newspapers.

According to a local researcher of anomalous phenomena, the case in Yorkshire shows all the signs of abduction of the animal by aliens: The corpse of the calf was clearly dropped from somewhere on top of the grass, the incisions were made very smoothly and with surgical precision, no traces of blood around the body were found.

The dead and mutilated calf was discovered on 4 July by local resident Albert Tias near the Gaddins Dam near Todmorden, Yorkshire.

Sheep always grazed in this field, no cows were kept here, so this detail already alerted Tias. When he saw how the unfortunate calf was mutilated, he immediately thought about the paranormal.

“This killing has all the classic signs of cattle mutilation. Pay attention to very precise and clean cuts. There is no sign that the calf was chased before being killed,” Deborah says.

“The very clean grass with no blood makes it unlikely that the animal was attacked by a dog or feline. And overall this is unlike the effects of an attack by any of the common animals in the UK,” she adds.

Deborah also found that there are many indications that the corpse was not brought to the field by car, but fell from somewhere from a height.

In the field, she also did not find fresh tracks from a tractor or other vehicle. The flesh of the calf was cut off from the side of the muzzle, the ears were cut off.

The owner of the calf has not yet been found, which is also quite unusual, because as a rule, all cases of loss or death of large livestock are recorded. This region was famous for its unusual occurrences before. The strangest of them all is the mysterious death of 56-year-old miner Zigmund Adamski in 1980.