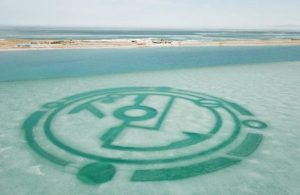 The so-called signs of aliens – “crop circles” – appear in other places, for example, on snow-covered plains. But in China something similar appeared even on the lake.

To the amazement of local residents, on April 12, on the south side of Lake Qinghai, they discovered a mysterious figure, the appearance of which no one could explain – neither scientists nor old-timers, who also encountered this miracle of nature for the first time.

The drawing is large, approximately 100 meters in diameter, and it is not clear how it appeared here, or what this message means, no matter who it comes from.

According to experts, something like this could have been attempted using, for example, a helicopter, but no aircraft had been seen in this high-mountainous area for a long time, including UFOs, assuming that the figure was drawn by aliens.

Qinghai Lake is the largest lake in China. Located in Qinghai province on an endorheic basin, Qinghai Lake is classified as a saline and alkaline lake.