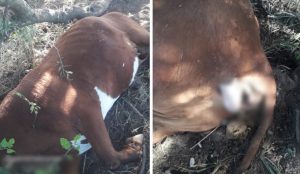 In Argentina, another case of the mysterious injury of an animal was recorded. It happened in the rural community of La Paz last week.

A local farmer recounted his cows in the evening and noticed that one of his cows was gone. After several days of searching, the farm workers found the dead body of a cow with carved organs.

The cow’s tongue was cut with very smooth movements and the flesh cut off from the half of the muzzle. The eyes were also removed, and the udder, genitals and rectum were cut out.

Not a drop of blood was found at the crime scene, although it is physically impossible to cut a cow in such a way and not shed blood.

“We also noticed that neither vultures nor other scavengers approach the cow’s corpse. Moreover, over the past few days since the death, the cow’s carcass did not even begin to rot and there are no signs of decay.”, said local farmer.

According to the farmer, the dead cow was completely healthy and there was definitely something paranormal. When the news spread around the district, people began to say that “the chupacabra has returned.” Last September, something similarly killed cows in these places.

Similar injuries of cows, sheep or goats have been occurring for several decades and are always following the same pattern: cuts with an unusually sharp instrument, lack of blood from wounds and close to the animal’s body, the same parts are removed – eyes, tongue, udder, genital organs, anus.