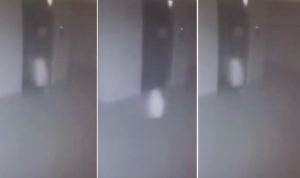 Surveillance video of an apparent ghost was taken at an empty school in Armenia after the security heard the voices of children in the early hours and called police to investigate.

According to YouTube channel The Secret Underbelly 2.0, the “ghost” is seen “walking into the door” and it looks as if it “packs up and down”.

“This footage was released by the security guard of the school in Armenia on February 2, 2020”, admin of YouTube channel The Secret Underbelly 2.0 wrote.

“On hearing voices of children in a school that that should had been empty at this time as this was on a Sunday morning the guard called the police and shortly after the police made their investigation they rolled out a known object from the school. Could this have been a body?”

“Feeling that this incident would remain untold the security guard recorded and released this footage along with what he had witnessed. The footage was released with no sound and the exact location withheld for the guard’s protection and anonymity to which I have to respect”

The clip amazed fellow believers and said it was definitely a real ghost-and not a bug as is often the case with these “paranormal” videos.