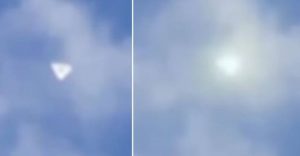 This triangular UFO video above Amsterdam was filmed on October 28, 2013, but its author posted it online only a few days ago.

A white triangle soars smoothly in the sky among the clouds, making slow corners and practically standing still. Therefore, at first glance, it may seem that this is just a paper or plastic bag blown into the sky.

However, at the very end, the object seems to explode with a bright yellow flash and disappears at tremendous speed, making a jerk to the left.

According to the author of the video, this may not be an alien ship, but the very secret American triangular plane TR3B, which is rumored to be based on the technology of a UFO shot down in Roswell.

However, it is unlikely that someone would launch TR3B in broad daylight over such a big city as Amsterdam.